Out of the (Carolina) blue, Tar Heels go for title vs Kansas 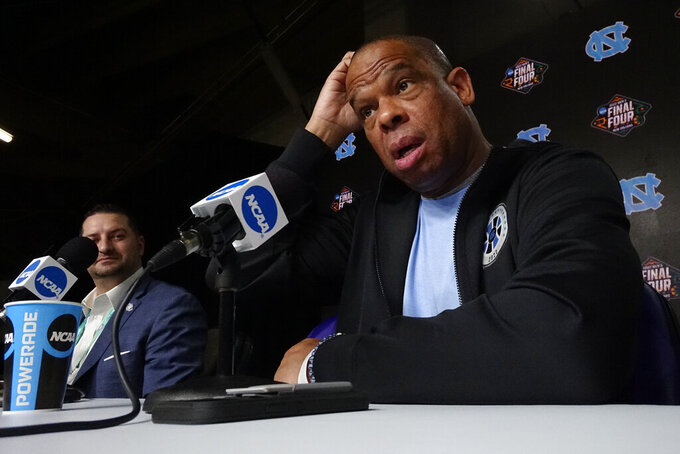 NEW ORLEANS (AP) — It should come as no shock that North Carolina and Kansas are playing for the national title. Their names, complete with their intertwined histories, are cemented on the short-short list of college basketball's greatest programs.

There's a bit of a twist in 2022. While lots of folks could have envisioned an obvious path for the top-seeded, fully loaded Jayhawks to reach this point, this run by the Tar Heels feels as if it came out of the Carolina blue.

A March Madness dominated by an underdog, tiny 15th-seeded Saint Peters, and a legend, Duke coach Mike Krzyzewski, comes to a close Monday night. It features Kansas, of course. And the Tar Heels — the team that put the hammer down on the top two feel-good stories of March only to become The Story themselves in April.

It is a team with one player, Caleb Love, who entered the NBA draft a year ago, only to pull out after learning that his prospects weren't that great. He showed them — going huge in two of Carolina's last three wins, including the dagger 3-pointer against Duke that cemented an 81-77 win and shoved Coach K into retirement.

It is a team with a rookie coach, Hubert Davis, who oversaw a handful of lopsided losses that sent the Tar Heels tumbling from the Top 25 and, for a time, had them looking more like a bubble team than one contending for the program's seventh championship.

It is a No. 8 seed. A win Monday in the Superdome would make North Carolina only the second 8 seed to take the tournament. The other: The 1985 Villanova team, which pulled one of the sport's greatest upsets, shooting 79% in “The Perfect Game," a 66-64 victory over big, bad Georgetown.

“All teams go through blips, and obviously, they've had a great year," Kansas coach Bill Self said of the Tar Heels. “But they were a bubble team six weeks ago, which is incredible to me.”

The Jayhawks this season were never on the bubble. In almost every way, this is a title run that's been building since 2020. Two seasons ago, Kansas was a top-five team in The Associated Press poll for all but one week. The Jayhawks were cruising toward the tournament, with a 28-3 record and on pace to receive the top overall seed.

But COVID-19 scrubbed March Madness. Instead of entering the tournament as the favorite to win the program's fourth NCAA title, the Jayhawks spent the quarantined Summer of 2020 thinking about what might have been.

“I don't think of it as ‘what-if,’” said senior forward David McCormack, who averages 10 points and seven rebounds. “I know what we would have done that year. We were just on a positive slope.”

Including McCormack, this year's team has seven holdovers from that squad. That includes forward Mitch Lightfoot — a senior, if you can call him that. This is his sixth year at the school, a result of a redshirt season in 2019-20 and the COVID pause, which allowed players the opportunity to extend college an extra year.

Also, senior Ochai Agbaji. Like Love of Carolina, Agbaji took a look at the NBA draft last year before pulling back. His reward: A possible national title and the increasing likelihood of hearing his name called in the first round of the draft, not the second.

The top eight scorers on the Jayhawks have appeared in a mindboggling 973 college games, including the 81-65 beatdown they put on Villanova on Saturday in the semifinal.

“I think one of the keys to college basketball is going to be how to get old and how to stay old,” Self said. “And we've been fortunate that we've been able to do that the last couple of years.”

North Carolina has a senior (Leaky Black), a junior (Armando Bacot), two sophomores (Love and R.J. Davis) and a graduate transfer from Oklahoma (Brady Manek). There's experience there, too. Still, Kansas is a four-point favorite according to FanDuel sportsbook, and this marks the fourth of six games in the tournament in which the Tar Heels have been underdogs

These guys have won 10 of their last 11, including their 94-81 win at Duke on March 5 that ruined Krzyzewski's going-away party at Cameron Indoor Stadium. The victory over the Blue Devils on Saturday was an even bigger win.

It was a fast-paced, emotion-saturated thriller. As much as any individual matchup in Monday's game, the X-factor might be whether the Tar Heels can bounce back from such a huge victory in such a monumental game. (Though the inside matchup between McCormack and Carolina's double-double machine, Bacot, should be interesting, and a critical part of the game, too.

“It was good winning, but we want to bring a championship home and hang up a banner,” Bacot said. “Beating Duke doesn't give us a banner."

Whoever hangs this banner will have prevailed in one of the biggest-name matchups in the history of the tournament.

Though separated by 1,100 miles, these schools have been attached at the hip for decades. Larry Brown played at North Carolina and later coached Kansas to a title. Roy Williams was head coach at Kansas for 15 years and Carolina for 18 more. The pathway between KU and UNC was paved by none other than Dean Smith, the coach with his name on the arena in Chapel Hill. Smith was a Kansas alum who started his coaching career there as an assistant.

Also, Hubert Davis, the current UNC coach, has a memory. He played for the Tar Heels when they lost to Kansas in a 79-73 heartbreaker in the 1991 national semifinals. Davis said he re-watches that game every year.

“It would make me cry,” he said. “And every time I watched it, I would think, ‘Maybe this time, it’ll turn out differently.'"