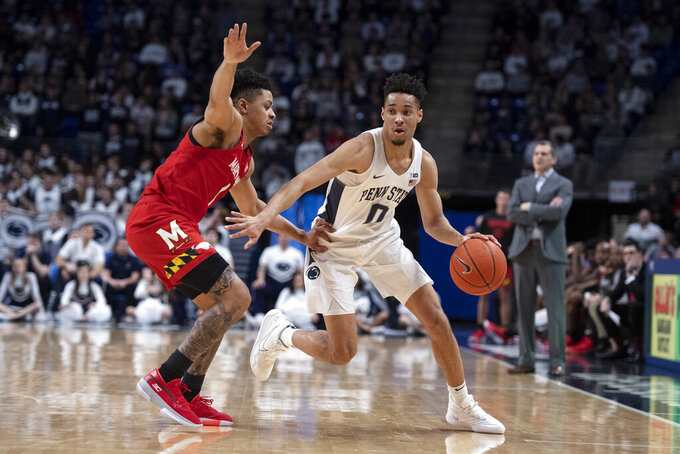 FILE - Penn State guard Myreon Jones (0) drives past Maryland guard Anthony Cowan Jr. (1) during the second half of an NCAA college basketball game in State College, Pa., in this Tuesday, Dec. 10, 2019, file photo. Penn State went 21-10, made a cameo appearance in the Top 25 for the first time since 1996 and finished 11-9 mark in conference play last season but lost leading scorer Lamar Stevens and leading rebounder Mike Watkins to graduation. The team that relied heavily on its frontcourt will have to find scoring from a backcourt led by junior Myreon Jones and Binghampton transfer Sam Sessoms. (AP Photo/Barry Reeger, File) 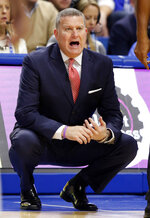 STATE COLLEGE, Pa. (AP) — It took the better part of a decade, but Patrick Chambers had Penn State basketball on what athletic director Sandy Barbour called a “positive trajectory.”

Time to see if the Nittany Lions can continue it without him. Chambers' abrupt resignation last month following an internal investigation by the school into allegations of inappropriate conduct threw a massive wrench into a program that finally appeared on the cusp of relevancy in the Big Ten for the first time in a long time.

The school promoted assistant Jim Ferry to serve as interim coach for the 2020-21 season. Ferry led Long Island University to consecutive NCAA Tournament appearances in 2011 and 2012 before spending five years unsuccessfully trying to lift Duquesne out of the doldrums.

Now he takes over a team that was on its way to securing its third NCAA berth in nearly a quarter-century before the pandemic brought sports to a halt.

Penn State went 21-10, made a cameo appearance in the Top 25 for the first time since 1996 and finished 11-9 mark in conference play last season but lost leading scorer Lamar Stevens and leading rebounder Mike Watkins to graduation.

Now a team that relied heavily on its frontcourt will have to find scoring from a backcourt led by junior Myreon Jones and Binghampton transfer Sam Sessoms.

Jones averaged 13.3 points and shot an impressive 40% from 3-point range as a sophomore but was hardly a spot-up shooter. Jones is capable of getting to the basket — his 268 free-throw attempts were second on the team behind Stevens — and the Nittany Lions will have to lean on his versatility to open up the floor for Sessoms.

The NCAA granted Sessoms a waiver to play immediately and Penn State will need him to continue to put up the impressive numbers as he did at Binghampton (19.4 points per game). The Big Ten represents a significant step up from the America East but Sessoms has shown the ability to hang with stiffer competition. He scored 23 points last season against Pittsburgh and poured in 25 points on the road against Notre Dame as a freshman.

Junior guard Myles Dread isn't shy about putting it up from behind the arc. Nearly 84% of Dread's 242 field goal attempts last year were from 3-point range. The issue, however, was making them. Dread made just 32% of his 3s and actually finished with just nine more makes (65) than Jones (56) despite taking 65 more attempts from behind the line. It's unclear how he'll fit into things with Sessoms expected to play a major role.

How Penn State competes in the Big Ten will likely depend on whether their big men can make opponents pay for focusing on the backcourt.

Stevens and Watkins did most of the dirty work last year, combining for 14.5 rebounds. Now that they're gone, the responsibility to be productive in the paint will fall largely to an undersized frontcourt that includes 6-foot-9 senior John Harrar, the leading returning rebounder at 4.3 per game who must stay out of foul trouble. Harrar drew 68 whistles while playing just 17 minutes a night.