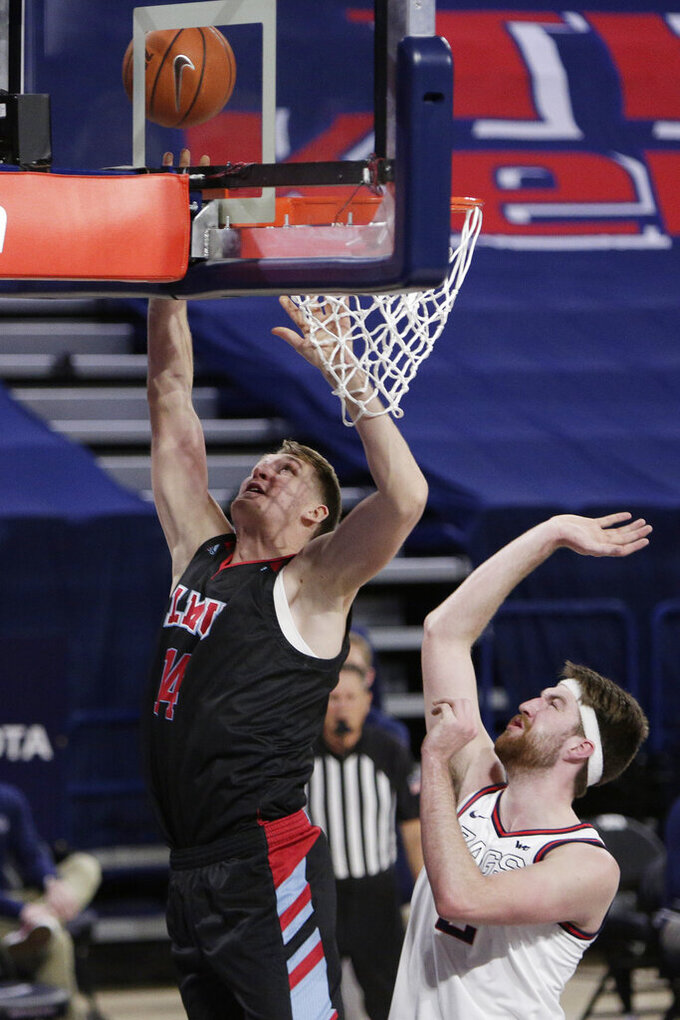 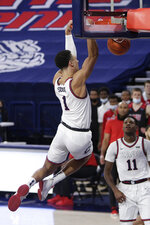 SPOKANE, Wash. (AP) — At this point in its long run of success, it's hard to find a new accomplishment for Gonzaga to check off.

The top-ranked Bulldogs completed one of those unfinished tasks on Saturday night, closing out an unbeaten regular season with an 86-69 win over Loyola Marymount.

Corey Kispert made six 3-pointers and finished with 24 points, and the top-ranked team remained the only unbeaten in the country after No. 2 Baylor lost earlier on Saturday.

The Bulldogs (24-0, 15-0 WCC) won their 51st straight home game to set a school record, and finished off the first perfect regular season in program history. Gonzaga has won 28 straight games dating to last season and is the first team to finish the regular season unbeaten since Kentucky in 2014-15.

“It’s getting harder and harder to find something that’s never been done in this program. There’s very few things left,” Gonzaga coach Mark Few said. “For this group to be able to notch that is amazing, and when you factor in they didn’t have ‘The Kennel’ to rely on at all to me is just remarkable.”

Normally the final home game of the season for Gonzaga would have been a wild celebration of the Zags two seniors — Kispert and Aaron Cook. And while both were acknowledged before tip off, the game itself was just another obstacle in the Zags attempt for perfection.

“It did just feel like another game," Kispert said of likely his final home game. "That’s just kind of the theme of the whole year. We got to be professional about this kind of stuff. I know, whether we like it or not, there’s nobody in the building so you know it hasn’t hit me yet.”

Eli Scott had 20 points and 11 rebounds to lead Loyola Marymount (12-8, 7-5), and Mattias Markusson added 19 points and 10 rebounds. LMU coach Stan Johnson felt the Lions had opportunities to keep the game closer, but turnover problems late in the first half changed the momentum.

“If you’re going to play a team like that, to give them that many possessions back, your chances of winning are minimal,” Johnson said. “That really changed the game. Our turnovers led to easy baskets and got them in transition.”

Kispert rediscovered his shooting touch from deep that had been a bit off of late. Kispert was 6 of 20 on 3-pointers during a five-game span earlier this month. But he hit 3 of 8 in the Bulldogs win over Santa Clara on Thursday and was even better against LMU.

Kispert made 6 of 10 shots from deep against the Lions, and the Bulldogs shot 53% from behind the arc.

For the second straight game, the Bulldogs were pushed early. Loyola Marymount led by as many as five points midway through the first half before Gonzaga closed the half on a 12-3 run to take a 40-30 lead at the break.

The Lions saw the lead evaporate after Keli Leaupepe picked up his third foul with 5:59 left and LMU leading 23-22. Gonzaga outscored LMU 63-47 over the final 26 minutes.

Loyola Marymount: The Lions needed to be perfect to hang around with the Bulldogs, but were far too sloppy. LMU committed 19 turnovers, leading to 29 points for Gonzaga. LMU did well using its size to bully the Bulldogs on the interior, but were careless with the ball.

Gonzaga: The Bulldogs won their 21st straight game by double-digits as the No. 1 team in the AP Top 25. That sets a record for consecutive double-digit wins by a No. 1 team, topping the 20-game streak of UCLA during the 1971-72 season.

Loyola Marymount: The Lions will play in the WCC tournament next week.

Gonzaga: The Bulldogs will be the No. 1 seed in the WCC tournament and have a bye to the semifinals.