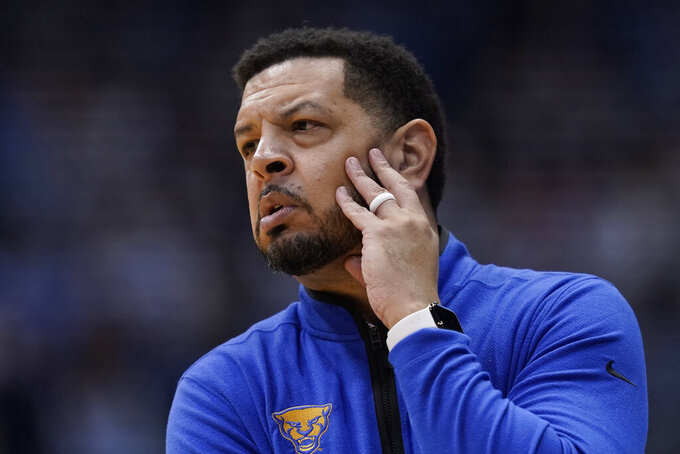 FILE - Pittsburgh coach Jeff Capel watches during the first half of the team's NCAA college basketball game against North Carolina in Chapel Hill, N.C., Feb. 16, 2022. Capel enters his fifth year with the Panthers still searching for his first winning season since taking over the program in the spring of 2018. (AP Photo/Gerry Broome, File)

PITTSBURGH (AP) — The names have changed several times over since Jeff Capel arrived at Pitt in the spring of 2018.

Capel's mission, however, has not.

The Panthers have yet to finish with a winning record under Capel, who is 51-69 taking over the floundering program following Kevin Stallings' disastrous two-year run.

While athletic director Heather Lyke still believes Capel will return Pitt to relevance in the ACC, the clock may start ticking if the Panthers don't take a step forward.

So rather than invest heavily in freshmen — with the notable exception of Dior Johnson, who has been suspended indefinitely and is facing multiple charges following an incident in September — Capel has turned to the transfer portal.

Guard Nelly Cummings, a Pittsburgh native, returned home after stays at Bowling Green and Colgate. Forward Blake Hinson spent three seasons at Mississippi before a stint at Iowa State, where he never played because of an illness and then a coaching change. Guard Greg Elliott came to Pitt after four seasons at Marquette and could give the Panthers the outside shooting they've lacked.

What exactly that looks like, however, is unknown. Pitt went 11-21 in 2021-22 and won six conference games for the third straight season.

Sometimes, the Panthers looked close to emerging from a funk that now extends for the better part of a decade. Other times, they looked as overmatched as they were the day Capel took over.

“I love the pieces that we have,” he said. “I love how we’ve practiced. I love everything about this group, and I’m excited about what I think we can become.”

The trick for Capel will be finding out how all the pieces fit together. Power forward John Hugley showed the kind of toughness Pitt used to be known for during its Big East heyday, averaging 14.8 points and 7.9 rebounds. Guard Jamarius Burton provided a steady hand and seems content with the Panthers following stops at Wichita State and Texas Tech.

Capel has praised Burton's leadership skills, something Burton made a point of emphasis last season after coming from programs with a winning pedigree.

This season, Burton believes he won't have to carry the load alone in that department. Cummings and Elliott have both played over 100 career games, as have Burton and Nike Sibande, who is back for a sixth season.

“I think the experience that we’ve been able to add to this team is big,” Burton said. “Having multiple guys on the same page as far as knowing how hard and smart you have to play to win games is going to be pivotal this year.”

Johnson is the third Pitt player in as many years to run into legal trouble. Hugley faced three felony charges — later dropped — after allegedly stealing a car in 2020. Former guard Ithiel Horton was suspended for a time last fall after a run-in with city police. Those charges were also dropped.

The process with Johnson is still playing out and it's uncertain when or even if the player who was the highlight of the incoming freshman class will be available.

The Panthers have yet to finish in the top half of the ACC in 3-point shooting during conference play during Capel's tenure and were 13th in the 15-team league last year, making just 31% of their long-distance shots.

Elliott is a career 41% 3-point shooter, though he did so in a somewhat limited role at Marquette. Sibande knocked down 43% of his 3s during his first season at Pitt in 2020-21.

While the Panthers are relatively undersized, they've found a trio of big men with international roots.

Freshman twins Guillermo and Jorge Diaz Graham could be interesting longer-term projects for Capel. Guillermo is 7-feet tall and played for Spain's Under-20 national team. Jorge is right behind his “big” brother at 6-11.

The Panthers also have 6-11 center Federiko Federiko, who was born in Egypt and raised in Finland. Federiko comes to Pitt from Northern Oklahoma junior college.

Pitt opens the season on Nov. 7 against Tennessee Martin before longtime rival West Virginia visits on Nov. 11. Games against Michigan, Vanderbilt and Northwestern highlight the rest of the nonconference schedule. The ACC slate includes back-to-back visits by North Carolina and Virginia around New Year's and a game at Duke — Capel's alma mater — on Jan. 11.