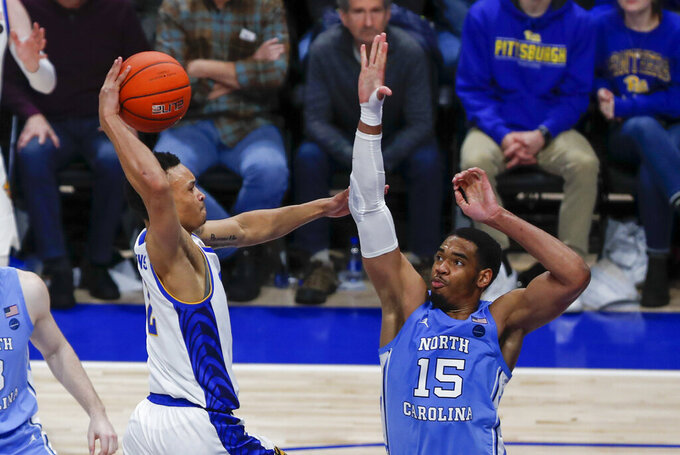 Pittsburgh's Trey McGowens, left, tries to go over North Carolina's Garrison Brooks (15), but lost the ball as he was fouled by Brooks during the second half of an NCAA college basketball game, Saturday, Jan. 18, 2020, in Pittsburgh. Pittsburgh won 66-52. (AP Photo/Keith Srakocic)

PITTSBURGH (AP) — Pittsburgh guard Trey McGowens is transferring, the second high-profile departure from the rebuilding program in less than a week.

The Panthers took significant strides during McGowens' two seasons thanks in part to his dynamic play. He set a school freshman record by pouring in 33 points in an upset of Louisville in January, 2019 and averaged 11.6 points.

McGowens expected to make a significant jump during his sophomore year but struggled with consistency. His scoring averaged dipped to 9.1 points over Pitt's final 16 games, a span in which he shot just 32% from the field and 29% from 3-point range. The Panthers wilted down the stretch, losing eight of their final nine.

McGowens joins junior guard Ryan Murphy in the transfer portal. Murphy, who averaged 7.6 points while making a team-high 42 3-pointers, announced over the weekend he will attempt to play for another school next season as a graduate transfer.