Syracuse, ACC scoring leader Hughes under the radar no more 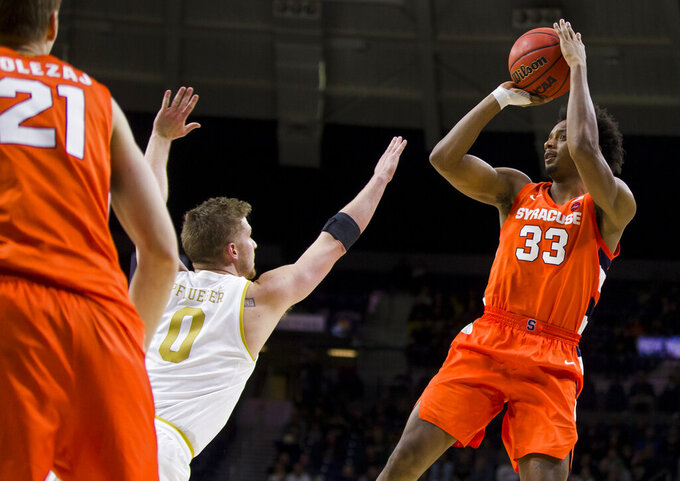 SYRACUSE, N.Y. (AP) — Syracuse coach Jim Boeheim has rarely taken transfers in his 44 years at Syracuse. Elijah Hughes is one of a handful, and he's become invaluable in his second season.

“I think there's been two players in the last 20 or 30 years that averaged 20 points, four rebounds and four assists a game," Boeheim said. “What he's done is absolutely remarkable.”

So much so that Hughes, the Orange's lone returning starter, was named a finalist this week for the Julius Erving Award, presented annually to the top small forward in men's college basketball.

At last some recognition for an unassuming player who simply aims to please.

A redshirt junior, the 6-foot-6 Hughes has been remarkably consistent morphing into an elite player this season and the team leader following the departure of stars Tyus Battle, Oshae Brissett and Frank Howard. He tops the Atlantic Coast Conference at 19.4 points per game, is averaging 38.2 minutes, tops among Power Five players, and leads the Orange in assists (87) and averages five rebounds.

Not a big deal, apparently, and that's a good thing.

“I just try to take everything one day at a time, try to be the best player I can be," said the soft-spoken Hughes, who fell in love with basketball in seventh grade, gladly going from tight end in football to the hardcourt. "I don’t really know what to say (about the consistency). I just kind of go with the flow.”

Hughes' unselfish demeanor has helped Boeheim's sharp-shooting son emerge as one of the top long-range threats in the country. Buddy Boeheim has made 77 3-pointers, tied for fifth nationally. The duo have formed an imposing combination from behind the arc, with Hughes contributing another 60.

Hughes, who averaged 13.7 points last season, has even spent time at point guard on a team that has five freshmen. Although the Orange (13-9, 6-5 ACC) have lost two straight as they get set to host Wake Forest on Saturday night, Hughes remains upbeat.

"It’s been fun, to be honest. I’m really having a lot of fun with it,” he said. "I’m just kind of trying to bring them all in together, keep them in good spirits, stuff like that.”

Despite transferring after one season at East Carolina, Hughes gets high praise from his former ECU coach Jeff Lebo. He somehow convinced Hughes to leave his close-knit family in Beacon, New York, about 50 miles north of New York City, and enroll in a southern school.

“He could easily put up 22 shots a game," said Lebo, now with the Greensboro Swarm of the NBA G League. "He could average 26 points a game if he wanted to, but he's just not that type of kid. He wants to win, he wants the other guys on the team to like him, to like to play with him. That's the trait that's pretty neat to have.

"In today's world, a lot of guys don't have that trait. That's what makes him impressive, and he's still got room to take it to the next level.”

And to think that Hughes was pretty much overlooked. A Syracuse fan growing up, Hughes attended the Orange basketball camp and stood out. When it was time for college, Hughes said he had offers from Seton Hall, Providence, Iona, and a couple of Mid-American Conference teams, but not Syracuse. The Orange showed some interest, but had received NCAA sanctions in 2015 that limited the number of available scholarships.

Lebo got a head start on the recruiting trail at the urging of assistant coach Ken Potosnak, who had seen Hughes play as a junior in the Bronx and was sold on his potential, not to mention that demeanor.

A visit to Beacon was all it took.

“I loved his family," said Lebo, who played for Dean Smith at North Carolina. "He was about the right stuff. He was a pleasing type of kid. He wanted to do anything that the coach asked, wanted to please his parents, just a good kid.

"We knew that he had a chance to be really, really good because he had size, he could shoot it, he had a really quick first step, and he was a no-maintenance guy. I mean, you didn't have to worry about anything with Elijah — off the court, on the court, in the locker room. That brought a lot to the table, and he wasn't on the radar. Nobody really knew who he was, which is unheard of in today's world."

Hughes played in 25 games for the Pirates, seven as a starter, but was injured as a freshman in 2016-17. He averaged 7.8 points and 2.3 rebounds, but one year was enough.

"I wanted to be closer to home,” he said.

And when Syracuse called he was all in.

Lebo had expected it.

“The kid grew up a Syracuse fan," said Lebo, who left ECU a few months after Hughes. “We tried everything to try to keep him, but who can really blame a kid when he has a chance to go to his dream place?"