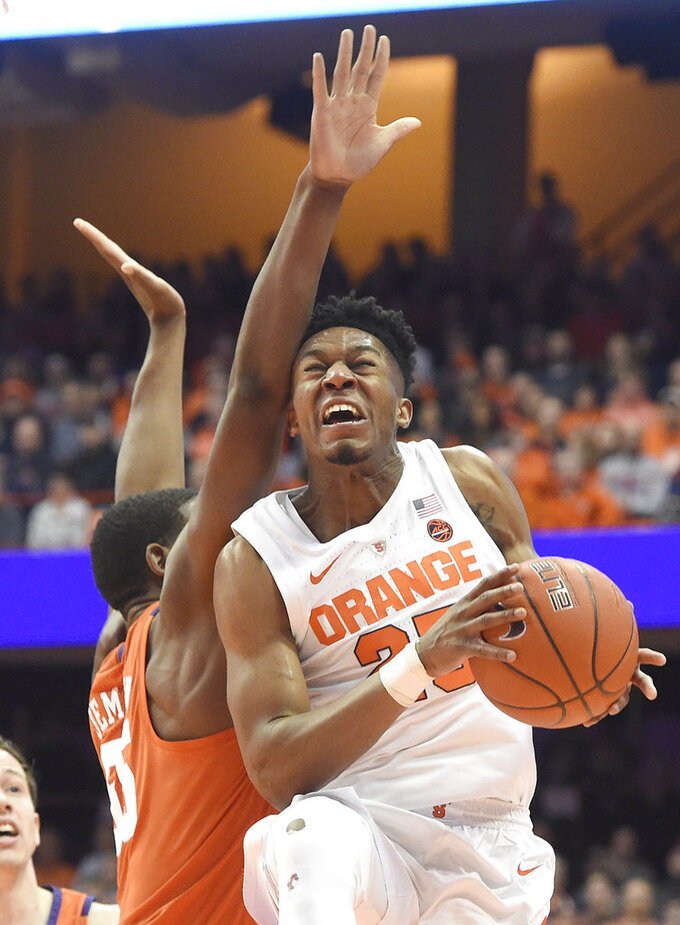 Elijah Hughes had 14 points to lead four Syracuse players in double figures and the Syracuse beat Clemson 61-53 Wednesday night, holding the Tigers to a season-low in scoring.

"No one had a huge night, but we were all just being aggressive and looking for our shot, trying to make something happen on the offensive end," Battle said. "That's how we have to play."

Marcquise Reed topped Clemson with 16 points and Elijah Thomas had 13 before fouling out late.

"Certainly, both teams didn't shoot well and we obviously had some trouble with the zone," Clemson coach Brad Brownell said.

Syracuse changed out of its zone with a 34-28 lead and pressed for a just a few minutes, forcing the Tigers into two turnovers and allowing Syracuse to extend its lead.

"The press threw us off a little bit," Brownell said. "We did practice against it for two days, but I thought our guys just weren't quite 100 percent alert. They (Syracuse) did a nice job mixing it in today for just a couple of possessions, which I think is smart. We broke it once. Maybe it would've helped us if they kept on pressing."

Boeheim said using the press as part of his defense's arsenal to change things up can work wonders.

"The press can help you or hurt you," he said. "We're trying to use it where we can, when we can, and if it works we'll stick with it. I think the press served its purpose."

"All in all, it was pretty much of an ugly game," Brownell said. "They just outplayed us a little bit tonight."

"We were just real aggressive and locked in on defense," Hughes said. "They have a lot of guys who can shoot outside and a real force down low, so we knew we had to lock in. Yeah, the press rattled hem a little bit. That's what we wanted. We got a few easy buckets and that really got us going."

A foul shot by Bourama Sidibe gave Syracuse its largest lead of the second half at 54-40, but Clemson scored eight straight points, seven by Reed, to close within 54-48 with 4:45 left.

Two foul shots by Reed kept the margin at six, but a key turnaround jumper by Brissett gave Syracuse a 58-50 margin with 2:39 to go. Clemson missed three consecutive shots, including a layup by Reed off a pretty give-and-go.

Hughes has scored at least 14 points in all but two games this season and between 14 and 17 points 10 times for the Orange.

At 6-foot-10 and 180 pounds dripping wet, Marek Dolezaj is better suited to the perimeter than at center, but he's been doing an admirable job since being inserted into the starting lineup. In addition to his 10 points, Dolezaj had four rebounds and four assists. His passing ability helps open the floor.

Boeheim kept center Paschal Chukwu glued to the bench Wednesday. Boeheim said Chukwu isn't hurt but offered little else as to why the former starter didn't see the floor.

While Reed led Clemson with 16 points, Brownell said his star guard still lacked "pop" in his second game back after sitting out three games with a knee injury.

Clemson: The Tigers have very little margin for error after starting conference play with consecutive losses. With a matchup Saturday against No. 4 Virginia, a slot in the NCAA Tournament could be a pipe dream.

Syracuse: The Orange are off to a perfect start in conference play after losing four times in the first two months of the season. Padding the resume is all-important going forward, and in the next three weeks the Orange play three ranked teams — Duke, Virginia Tech and Florida State, with only the Seminoles at home.

Clemson's challenging start to the ACC schedule continues Saturday when the Tigers host No. 4 Virginia.