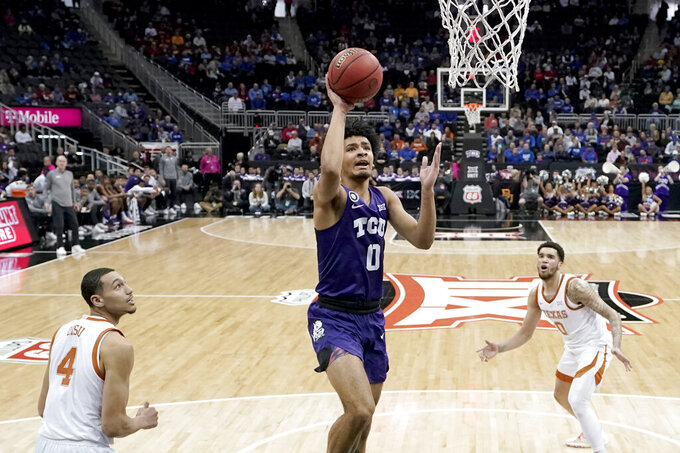 TCU guard Micah Peavy (0) puts up a shot during the first half of an NCAA college basketball game against Texas in the quarterfinal round of the Big 12 Conference tournament in Kansas City, Mo., Thursday, March 10, 2022. (AP Photo/Charlie Riedel) 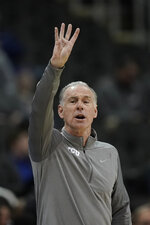 KANSAS CITY, Mo. (AP) — TCU coach Jamie Dixon and Texas counterpart Chris Beard delivered the exact same message at halftime of their Big 12 quarterfinal: Even though the Longhorns had built an 18-point lead, the game wasn't over.

Their teams took it in wildly different directions.

The Horned Frogs heated up on offense, buckled down on defense, and rode Damion Baugh and Mike Miles on a frantic comeback over the final 20 minutes, while the No. 22 Longhorns failed to show the same kind of fight that had built them such a big lead. The result was a 65-60 victory that sent TCU into the semifinal round.

“The message was to stay confident, not get down on ourselves,” said Miles, who overcame a dreadful first half and an ankle injury to score 13 points. "We knew it wouldn't be easy to come back from 18 down, but we stuck together, we played better, we started to knock down some shots. That was the message."

The halftime deficit was the largest overcome by an unranked team against a ranked opponent since Illinois rallied from 20 down to beat No. 18 Clemson 76-74 on Dec. 2, 2009.

“The message from coach was the game's not over. There's still 20 minutes left,” Longhorns guard Marcus Carr said. “They are not a team that's going to lay down. Credit to them. They came out and fought their way back.”

The Horned Frogs trailed 40-20 before Miles scored just before half, and that started a comeback fueled by hot shooting and defensive stops. They pulled ahead with just under seven minutes left, then took the lead for good when Baugh — who had a game-high 17 points — found Eddie Lampkin under the basket on a set play out of a timeout.

Carr missed at the other end for Texas (21-11), Lampkin pulled down the rebound, and Francisco Farabello made both of his free throws with 15.9 seconds left to put the game away.

“We told them we had a chance. We had an opportunity," said Dixon, whose team will play sixth-ranked Kansas for a spot in the Big 12 title game. "They would slow it down and we would play better.”

“We knew we had to keep playing,” Allen said, “and we did not do that.”

There was an odd feeling for the quarterfinal inside T-Mobile Center as a winter snowstorm swirled outside. Two years ago, the Longhorns were on the same court preparing for a game against Texas Tech at the exact same time of day when phones belonging to Big 12 officials began to chirp. Within an hour, the tournament was canceled by the COVID-19 pandemic, along with the NCAA Tournament, and life is still working its way back to normalcy.

Last year's tournament, where the Longhorns beat the Red Raiders for the title, was played inside a mostly empty arena.

Texas appeared to put its quarterfinal against TCU away early, going on a 20-1 run late in the first half. Allen did most of the damage with back-to-back baskets and a pair of free throws on consecutive possessions, and Brock Cunningham hit a 3-pointer from the top of the key, eventually giving the Longhorns a 20-point lead in the final minute of the half.

Miles, the second-team All-Big 12 guard who'd been 0 for 7 from the field, finally got a tough layup to go inside the final minute, drawing the Horned Frogs within 40-22 at the break.

It wound up being the start of a massive comeback.

Miles led the way by hitting four straight baskets, including a couple 3-pointers, and Baugh hit another as the Horned Frogs whittled the deficit to 52-48 with just under 10 minutes to play. And when Devin Askew slid into Miles and the TCU star had to leave briefly with a right ankle injury, Emanuel Miller carried the baton.

His basket with 6:45 to go gave the Horned Frogs their first lead since midway through the first half, and Dixon's team was able to hang on through some pressure possessions to pick up the win.

TCU has only made one other Big 12 Tournament semifinal game, losing during the 2017 event. In fact, the Horned Frogs were just 5-9 in the tournament with losses to Kansas State in each of their last four trips.

Texas: After shooting 65.2% from the field in the first half, the Longhorns were 1 of 11 from beyond the arc and shot 22.6% in the second half. They also were beaten on the boards and dominated in the paint.

The Horned Frogs will play the Jayhawks on Friday night. The teams split a pair of games just last week.