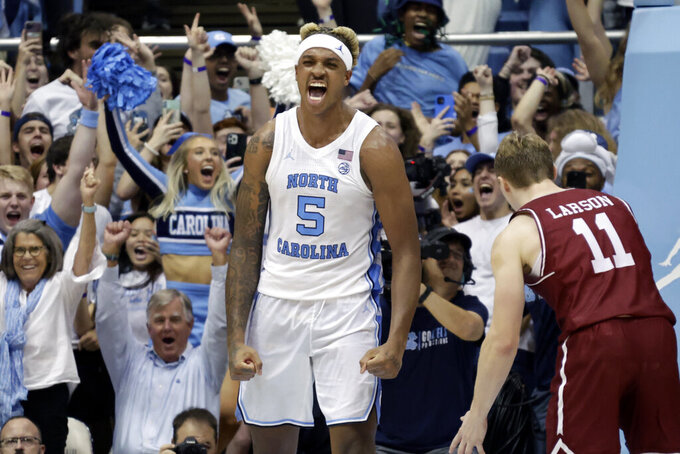 CHAPEL HILL, N.C. (AP) — Armando Bacot started setting his feet, sealing off defenders and demanding the ball inside. His teammates complied. And that's what finally got top-ranked North Carolina rolling offensively against the College of Charleston.

It also helped that coach Hubert Davis got the response he wanted after a “soft” first half, too.

Bacot had all but one of his 28 points after halftime to help UNC push past Charleston 102-86 on Friday night. The 6-foot-11 preseason Associated Press All-American got just one shot attempt in an opening half that set the tone for an offensively driven game with neither team consistently stringing together stops.

The Tar Heels (2-0) seemingly had to outscore the Cougars (1-1) after trailing at halftime as well as respond to physical play. Getting Bacot established helped both.

“He caught the ball where he wanted to,” Davis said. “He outworked whoever defended him to catch the ball as close as he could to the basket. His moves were definitive and strong, and he either scored or got fouled. I was very proud of him.”

Bacot went 10 for 12 from the field after the break.

“I still think my approach has got to be better. I didn't think I played a good game today. I don't know, I guess it's something I've got to think on and just look at film and see what I need to work on and just get better at it,” he said.

Dalton Bolon scored 14 of his 16 points before halftime for Charleston, which led by eight points in the first half and 50-43 at halftime.

The Cougars shot nearly 53% in the first 20 minutes and hovered well beyond 50% until fading in the final minutes as the Tar Heels finally asserted control. Coach Pat Kelsey said his team knew "the storm was coming” but kept battling.

“Our guys withstood a couple of those runs, so that resilience was something exciting and something really good to see,” he said. “Obviously that last tsunami at the end, it was sort of game over from there.”

Charleston: Picked to finish fourth in the Colonial Athletic Association, the Cougars scored 85 points with nine 3-pointers in their opener to beat Chattanooga and showed plenty of offensive punch again. They repeatedly beat the Tar Heels off the dribble, including having their guards muscle UNC's backcourt of Love and RJ Davis in the paint. Ultimately, though, they lost their 12th straight game against ranked opponents.

UNC: The Tar Heels labored through their opener against UNC Wilmington with a performance that Bacot called “rusty” and Davis hoped was just “first-game anxiousness and nervousness.” This one looked better from an offensive standpoint while Davis thought the team responded better defensively after halftime. Still, the Tar Heels didn't go ahead for good until midway through the second half.

Charleston entered 6-27 against ranked teams, with the last win coming at Baylor in November 2012. ... UNC has been outrebounded in each of its first two games. ... The Tar Heels made 27 of 38 free throws compared to 6 of 9 for the Cougars. ... Charleston made 2 of 10 3-pointers after halftime. ... Love had nine rebounds and six assists for UNC, while Leaky Black had 15 points. ... Ante Brzovic had 12 of his 15 points before halftime for the Cougars.