Coach K back, No. 8 Duke rolls inside to beat NC State 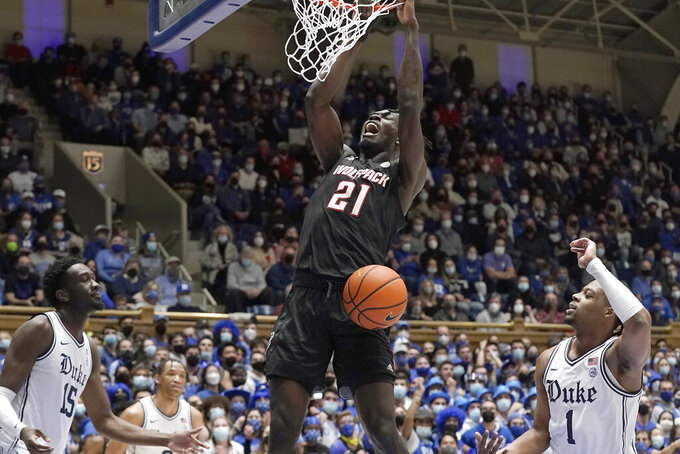 DURHAM, N.C. (AP) — Mark Williams patrolled the lane with an assertive edge that had him cleaning up misses, swatting away shots and scoring through contact from defenders flailing to stop him.

It was a reminder of the 7-foot-1 sophomore's potential up front for eighth-ranked Duke.

Williams had 19 points, 11 rebounds and eight blocks as Duke dominated inside to beat North Carolina State 88-73 Saturday in Hall of Fame coach Mike Krzyzewski's return from missing a game due to illness.

Paolo Banchero had a team-high 21 points for the Blue Devils (14-2, 4-1 Atlantic Coast Conference), who shot a season-best 58.3% and had complete control of the paint with Williams at the forefront.

“I felt like our bigs played outstanding today and helped us,” said freshman Trevor Keels, who had 12 points, a season-high nine assists and five steals.

The Wolfpack had been vulnerable since losing defensive-minded big man Manny Bates to an opening-night injury, and Williams thrived by making 9 for 12 shots. That included him finishing around the rim through multiple whistles — at least once having him screaming in exuberance toward the baseline fans.

Banchero had plenty of good looks of his own with his 6-foot-10 frame inside. Behind that duo, Duke finished with a season-high 58 points in the paint.

“That's an NBA frontcourt — you're talking about a 7-1 guy and a 6-10 guy who both are good at what they do,” Wolfpack coach Kevin Keatts said. “And they just completely dominated us at the 4 and the 5 (positions).”

The Wolfpack, who shot 41%, had won seven of the last eight ACC road games dating to last year, including a 16-point win Wednesday at Louisville. But the Blue Devils stretched out the lead shortly before halftime then scored on their first three second-half possessions to push the margin past double figures.

Duke pushed to a 19-point lead midway through the second half. N.C. State thrice got as close as nine, only to see Duke respond with a score on the ensuing possession each time.

N.C. State: Bates' injury significantly altered the Wolfpack's formula for success by taking away a strong rebounder and relentless shot-blocker. Games like this, facing a team with size and the willingness to feed the ball inside, exploit that weakness. It didn't help, too, that, 6-9 freshman Ernest Ross was out for this one with an ankle injury.

Duke: Banchero and surging fellow freshman A.J. Griffin have commanded the most attention of late for the Blue Devils, but Williams came through with a reminder of the impact he can have when Duke needs to work the paint. He showed that upside earlier this year in a win against Gonzaga (17 points, six blocks) then surpassed both totals with a new season-high points total and career-high in blocks.

Williams' best play might have been on one of his two assists.

Late in the first half, Keels pitched ahead to Williams in transition, but the pass was a little too long. Williams caught it underneath the basket but momentum was carrying him out of bounds. Yet he maintained his composure (and balance) to drop a short bounce pass back for an oncoming Banchero to finish with a dunk.

“I didn't want to put too much heat on it where he wouldn't catch it,” Williams said. "I mean, I knew he was there.”

Krzyzewski, who is retiring after the season, didn’t coach in Wednesday’s win at instate league foe Wake Forest due to what the school described as a non-COVID-related illness. Associate head coach Jon Scheyer, designated as Coach K’s successor, led the team in that one and expressed optimism that the 74-year-old would be back Saturday.

Krzyzewski looked like his usual self right away when he sprung up to animatedly object to an out-of-bounds call on a turnover less than 2 minutes in.

Afterward, Krzyzewski said he started feeling badly Monday night. He has remained negative for COVID-19 in a daily testing regimen.

“I thought I had COVID, even though I've been boosted and everything,” he said. "I had so many of those symptoms and I really almost had no energy at all. Just fatigued, I couldn't keep my eyes open.

Duke: The Blue Devils travel to Florida State on Tuesday.