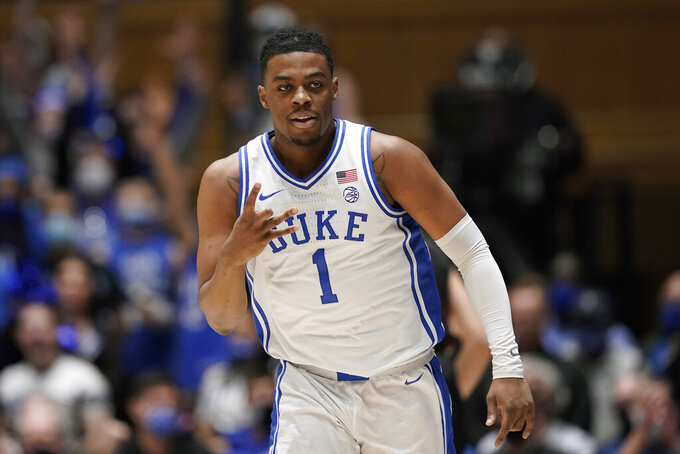 DURHAM, N.C. (AP) — Joey Baker hadn't seen a 3-pointer fall in three weeks for Duke. He stayed confident that it was just a matter of time.

When he got hot Saturday night, so did the ninth-ranked Blue Devils in finally stretching out a lead in a tight game.

Freshman forward Paolo Banchero scored 17 points and Baker had 12 first-half points to help Duke beat Florida State 88-70, a win coming with retiring Hall of Fame coach Mike Krzyzewski back after missing the second half of the previous game because he wasn't feeling well.

Baker's points came on four 3-pointers. That included back-to-back shots from each corner during the Blue Devils' game-changing push, which turned a one-point lead into a 52-41 halftime margin and ultimately a 24-point lead late.

“I hadn't played great obviously over the past few weeks or whatever,” Baker said. “But just staying ready for my team knowing there would be a time when my name's called and I'll need to step up and make some shots or make some plays.”

Baker had gone 0 for 8 from 3 over the last seven games since making three 3s against Clemson on Jan. 25.

“I thought he had two really good days of practice,” Krzyzewski said. "And he was prepared."

The Blue Devils (23-4, 13-3 Atlantic Coast Conference) closed the half on a 12-2 burst to take a 52-41 lead against the injury-depleted Seminoles, then did a better job containing FSU's drivers after halftime. Duke shot 52% for the game, including 11 of 28 from 3-point range.

The win allowed Duke to avenge last month's 79-78 overtime road loss to Florida State, as well as push into sole possession of first place in the ACC with Notre Dame's loss at Wake Forest earlier Saturday.

Freshman guard Matthew Cleveland scored 16 points to lead the Seminoles (14-12, 7-9), who played yet again with a shorthanded roster. They still had a strong start by penetrating into the paint and making 16 of 23 shots (69.6%) to offset Duke's own strong offense in rowdy Cameron Indoor Stadium.

But the Seminoles shot just 11 of 27 (41%) after halftime as the deficit ballooned.

“I thought that we didn't execute nearly as well in the beginning of the second half as we had in the first half,” FSU coach Leonard Hamilton said. “I thought once they got up about 15 points, it was extremely challenging for us to get over that hump.”

FSU: Injuries, a long-running issue, had the Seminoles down five starters. That included leading scorer Caleb Mills — sporting a boot on his left ankle after rolling it in last weekend's loss at North Carolina — and 6-foot-4 senior RayQuan Evans due to a banged-up knee from Tuesday's win against Clemson. The Seminoles played aggressively early behind Cleveland (11 first-half points) and fellow freshman Jalen Warley, who had 15 points and six assists in his third start.

Duke: The Blue Devils had six players in double figures and shared the ball well with 25 assists on 32 baskets, including eight assists from freshman Trevor Keels and seven more from Wendell Moore Jr.

Krzyzewski looked more like himself after Tuesday's early exit from a narrow win against Wake Forest.

The Blue Devils’ trainer had to tend to him during the first half of that game before associate head coach Jon Scheyer — Coach K’s successor when he retires this spring — took over after halftime and for the postgame news conference.

Krzyzewski said Saturday he felt better and was dealing with “basically exhaustion” after five games in 11 days.

“It's good seeing you,” Krzyzewski quipped afterward. “I'm glad I made it to the end of the game. ... They pay me to do the whole game, not portions of it. But thank goodness we've got a good staff.”

But Duke’s run followed. Minutes after Baker’s consecutive 3s came a spectacular transition sequence with Moore throwing a roughly halfcourt bounce pass to freshman A.J. Griffin for a rim-rattling dunk and a 51-41 lead.

Hamilton said he didn't think Mills will be ready to play Monday. Evans has a chance to play but added: “I'm not that optimistic about it.”

“Right now we just want those guys to be healthy,” Hamilton said. “And we're not going to play them unless I feel they're out of any danger or making matters worse.”

FSU: The Seminoles have a short turnaround, visiting Boston College on Monday.

Duke: The Blue Devils visit Virginia on Wednesday in the first of three straight road games.