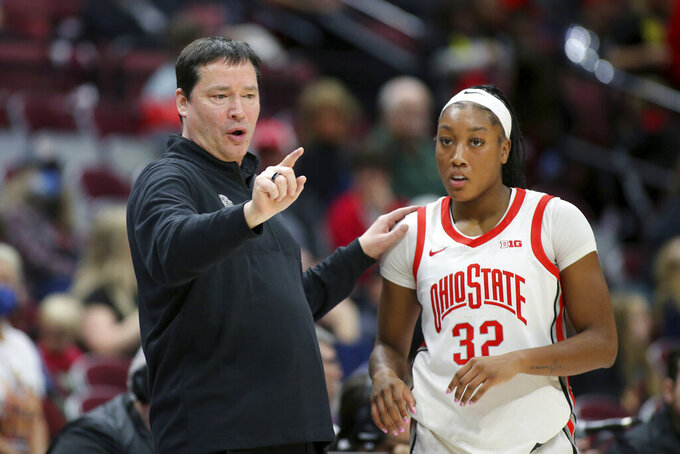 COLUMBUS, Ohio (AP) — Cotie McMahon tied a career high with 20 points and No. 3 Ohio State allowed only seven points in the second half of a 92-36 rout over New Hampshire on Thursday.

“We obviously didn’t play our best the first half. We let them score more points than they should have,” McMahon said. “We came out in the second half and played our game.”

McMahon scored 12 points in the second half and tied her career best with five steals. Taylor Mikesell added 19 points and made 4 of 6 3-pointers.

New Hampshire (4-7) held a 9-8 lead before Ohio State closed the first quarter on a 9-0 run. Mikesell scored 11 first-half points for the Buckeyes.

“We didn’t talk about any X’s and O’s stuff, just about our effort and intensity,” Ohio State coach Kevin McGuff said. “In the second half, we got back to that and I think the results were reflected.”

The Buckeyes forced five turnovers in the first 4:06 of the third quarter. They scored 26 unanswered points in a span between the third and fourth quarters.

Brooke Kane led the Wildcats with 13 points. New Hampshire had an 11-10 advantage on the offensive glass despite being out-rebounded 43-37.

“They really, really turned it up,” New Hampshire acting head coach Mandy Pennewell said. “They started pressing harder than they were in the first (half) on makes and misses, so it rattled us.”

New Hampshire’s seven second-half points tied for the fewest allowed in a half by Ohio State since allowing as many against Nicholls on Nov. 26, 2005.

McMahon contributed three of her five steals in the opening 2:02 of the third quarter. All three turnovers turned into scoring opportunities. The 6-foot freshman forward finished with nine field goals, a career high.

“You see her talent and just every game seems to get a little bit better,” McGuff said.

New Hampshire: The Wildcats scored just four points in the third quarter and shot 2 of 11 in the frame. Their 25.5% from the field is New Hampshire’s lowest in four games.

Ohio State: The second half was all defense for the Buckeyes, who forced 18 turnovers and swiped 12 steals in that span. Ohio State defended a season-best 16% against New Hampshire’s 3-point attempts.

“That’s our game,” McMahon said. “We knew what we were capable of doing. We just had to put it out there on the floor.”