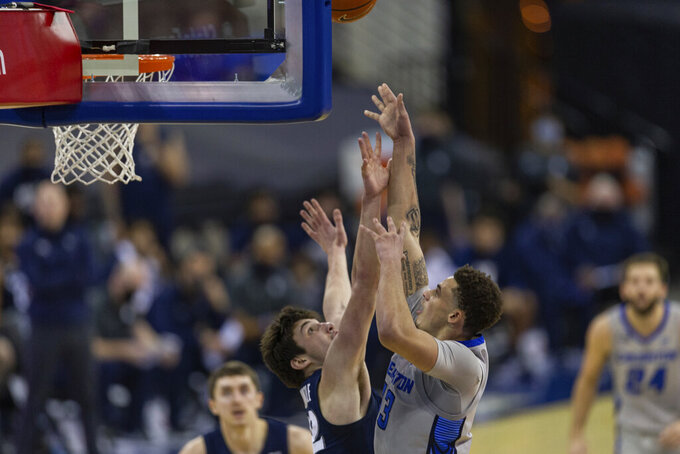 OMAHA, Neb. (AP) — Antwann Jones and Denzel Mahoney scored 13 points each to lead No. 13 Creighton to a 66-61 win over 22nd-ranked Xavier on Wednesday, handling the Musketeers their first loss of the season.

Neither team shot extremely well in the second half as Xavier was 2-for-16 from behind the arc and Creighton 3-for-13 in the final 20 minutes. The difference was at the free throw line where the Bluejays made 11 of 14 down the stretch after struggling in closes losses to Kansas and Marquette. Xavier only got to the line four times in the second half.

Xavier opened the game with 22-9 run after knocking down 9 of their first 13 shots. The Musketeers eventually cooled off and the second unit gave the Bluejays enough of a spark to pull ahead 36-34 at halftime.

Jones got Creighton’s offense rolling with 11 points and two assists in nine minutes off the bench in the first half.

Xavier leading scorer Zach Freemantle was held to seven points on 3 of 9 shooting. He fouled out with 2:38 remaining in the game.

Xavier: This was just the second road game of the season for the Musketeers. The first was at crosstown rival Cincinnati. A question of whether that high-powered offense could travel with them seemed to be answer early in the game, but after they hot start they missed 40 of their final 55 shots.

Creighton: After falling short in a couple close games against Kansas and Marquette, the Bluejays have proven in their last two games against Connecticut and Xavier that they can grind out wins when everything isn’t clicking on the offensive end.

Creighton will get an extended holiday break before returning to action at Big East rival Providence on Jan. 2.