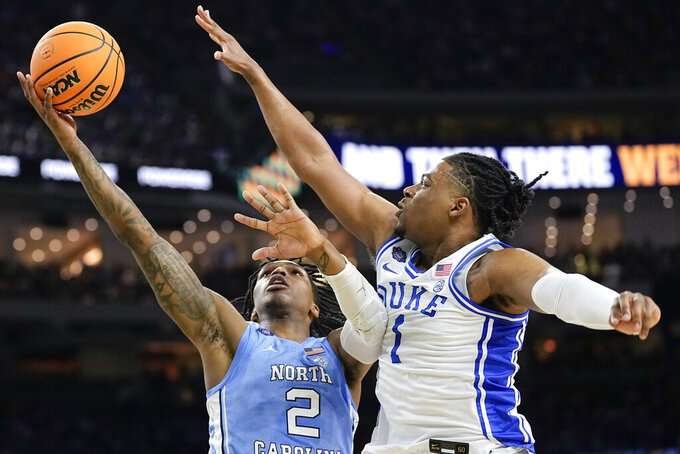 North Carolina's Caleb Love (2) shoots over the reach of Duke's Trevor Keels (1) during the first half of a college basketball game in the semifinal round of the Men's Final Four NCAA tournament, Saturday, April 2, 2022, in New Orleans. (AP Photo/David J. Phillip)

Duke freshman Trevor Keels is the fourth Blue Devils player in the past week to announce plans to enter the NBA draft.

The school announced Keels' decision Saturday and said he planned to hire an agent.

The 6-foot-5, 221-pound guard is a potential first-round prospect and is ranked as ESPN's No. 25 draft prospect. He averaged 11.5 points while providing size and strength to the Blue Devils' perimeter, both as a driving scorer and as a ballhandler.

Part of one of the nation’s top recruiting classes out of Clinton, Maryland, Keels started 26 games in the final season for Hall of Fame coach Mike Krzyzewski.

“The whole season was a movie and I am grateful to have been part of Coach K’s last ride,” Keels said in a statement.

Keels got off to a strong start, scoring 25 points with his physical attacking play in a season-opening win against Kentucky. He missed three midseason games with a calf injury and came off the bench for the NCAA Tournament when the team moved to Jeremy Roach to get improved defensive pressure on the ball.

Keels had two big NCAA Tournament performances, first with 12 points and a critical 3-pointer with 3:24 left as Duke rallied from five down late to beat Michigan State in Round 2. He closed with 19 points in the loss to rival North Carolina in the national semifinals in New Orleans.

“Trevor made tremendous improvement throughout the year and stepped up for us in critical moments,” Krzyzewski said in a statement.