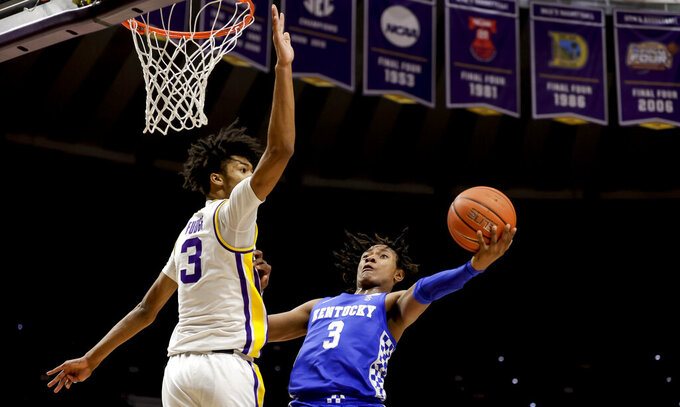 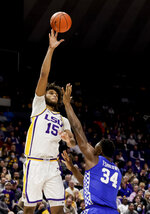 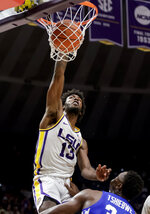 BATON ROUGE, La. (AP) — No. 21 LSU was on the brink of blowing a nine-point lead to 16th-ranked Kentucky in the final 2:25 when the Wildcats suddenly and stunningly flinched.

Tari Eason capped his 13-point performance with a dunk following Kentucky guard Davion Mintz's turnover in a one-point game with 13 seconds left, and the Tigers held off the Wildcats 65-50 on Tuesday night.

“Yeah, it was a wild finish,” Eason said. “Obviously, it wasn’t exactly the way we drew it up, but you know at the end of the day, a win is a win.”

Xavier Pinson added 11 points for LSU (13-1, 1-1 Southeastern Conference), capped by a flamboyant dunk in the final seconds after Kentucky's 15th and final turnover — again by Mintz — setting off a wild celebration inside the Pete Maravich Assembly Center.

“I thought the roof was going to come off at the end," LSU coach Will Wade said. "It was a fun night.”

Brandon Murray added 10 points for the Tigers in a tight contest in which neither team led by more than nine points.

Mintz's 3 and driving layup through cluster of converging players capped an 8-0 run that made it 61-60 with 27 seconds left.

LSU then turned the ball over on a long inbound attempt, but Mintz gave it right back. Pinson's third steal led to Eason's slam to begin the Tigers' finishing flourish.

“Not every day we can beat Kentucky. So, that’s good," Wade said. "But the reality is we’ve got a good team, too. The problem is around here we act all crazy when we do stuff.

“Our expectation here is to win at the top of the SEC," Wade continued. “If you’re going to do that, you’re going to win some big games at home and this is certainly one of the those.”

The Wildcats “had a couple of guys not play well, multiple injuries, and foul trouble," Kentucky coach John Calipari said. “We had funky lineups in that we had never used before, and that gave us trouble offensively because it’s like, ‘How do we play with this team?’ But the guys fought, and that’s all you can ask.”

Kentucky had to play all but the first four minutes of the game without Wheeler. The 5-foot-9 Georgia transfer, averaging 10.3 points and 7.8 assists per game, was flattened near midcourt when he ran head-first into a what was ruled a legal screen that the 7-foot, 230-pound Efton Reid set as Pinson dribbled by in transition.

“When Sahvir went down, he’s the engine on this thing and gets us all moving,” Calipari said. “They gave us a lot of physical (play), like, wow! Guys were getting knocked down — mostly our guys.”

With Wheeler lying dazed on the court, Pinson pulled up unguarded for a 3 and hit it, giving LSU an early 8-3 lead. Wheeler remained down after the play before two members of Kentucky's staff helped him to the locker room.

“It was a totally legal screen. It was just an unfortunate play," Wade said, adding that he knows and likes Wheeler and considers him a “great player.”

“You saw the domino effect" when Wheeler went out, Wade added. “They had to play some other guys.”

Kentucky: Wheeler's injury and early foul trouble for Tshiebwe proved difficult for Kentucky to overcome on the road against an LSU squad that was eager to bounce back from an ugly loss at Auburn a week ago. Tshibwe's eight points were well below his team-leading average of 15.8 points per game coming in.

LSU: The performance helped validate the Tigers' ranking and 12-0 record in nonconference play before their 15-point loss at Auburn. LSU matched Kentucky's physicality and athleticism on the defensive end with Reid blocking a game-high three shots. The Tigers also made clutch shots down the stretch.

"I like the way our guys responded. We learned some lessons from the Auburn game and we were able to apply those,” Wade said “Our defense has been great. We’ve got to keep that up.”

At halftime, LSU held a ceremony to name the court for former coach Dale Brown.

“My name would not be any bathroom in this building, but it’s on the court. Look here. This is why,” Brown said, gesturing toward former players and associates gathered on the court around him. “The best potential of me is we. This is an example.”

Some of his former players on hand included Mahmoud Abdul-Rauf, who went by the name Chris Jackson when he played for the Tigers, and Johnny Jones. Shaquille O’Neal, who said he could not make the event because he was taking care of children with COVID-19, sent a recorded message congratulating Brown that was played on the scoreboard.

“Congratulations,” O’Neal said. “This is past due.”

LSU: Hosts No. 18 Tennessee on Saturday.