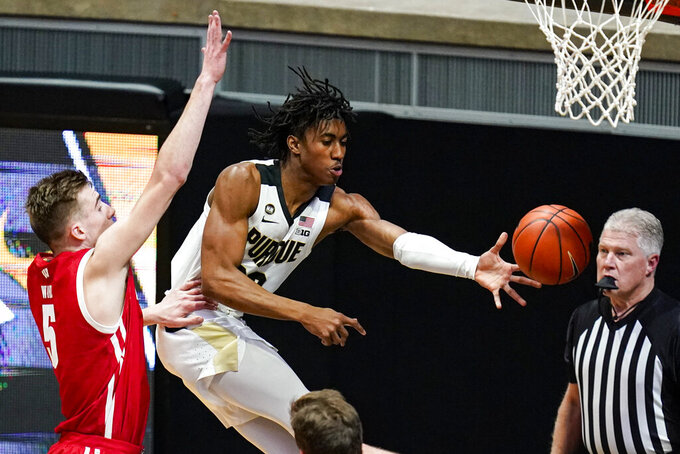 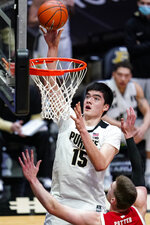 WEST LAFAYETTE, Ind. (AP) — Zach Edey developed his closing mentality on the pitching mound. He showed Tuesday it works pretty well on the basketball court, too.

The strong, stone-faced freshman scored a career-high 21 points including nine straight during one stretch and led No. 23 Purdue to a crucial 73-69 victory over No. 25 Wisconsin.

“When the score gets close, my emotions come out and my inner competitiveness comes out," said Edey, who was a closer for his high school baseball team. “I love to compete in situations like that when the team’s leaning on me like that."

With the Boilermakers in second-half foul trouble, the 7-foot-4 center did more than just stand tall. He delivered time after time — going 8 of 11 from the field and grabbing seven rebounds.

And after his initial flurry helped steady Purdue (17-8, 12-6 Big Ten), the Boilermakers never trailed again. Purdue has won four straight and five of its last six and is now in position to secure a bye in next week's Big Ten Tournament.

Ben Davison led the Badgers with 15 points while Micah Potter and Nate Reuvers each had 11. Wisconsin (16-10, 10-9), has lost four of five overall —- all against ranked teams — and five straight at Mackey Arena where they are 4-42 all-time.

Coach Greg Gard knew exactly what went wrong in this one.

“I thought we did a decent job on (Trevion) Williams, but Edey, obviously with is size there are some things that are harder to combat," Gard said. “They got him in good positions and spread us out and its hard to get back and defend him. And then his ability to get to the free-throw line, too."

Wisconsin had no answers for Edey — especially in the second half of a topsy-turvy game.

The initial nine-point flurry allowed Purdue to play from the lead and after Ivey and Aaron Wheeler finally broke up Edey's run, the Boilermakers finally led 61-56 with 4:44 left. Edey then scored the next two baskets to make it 65-62 and Purdue eventually closed it out at the free-throw line.

“The guy was a beast, man," Ivey said. “He came with that mentality and that’s what we needed."

Wisconsin: The Badgers haven't traditionally played well at Mackey. What isn't common — Wisconsin finishing poorly while trying to finish above .500 in league play. They need a quick turnaround to make a conference tournament run.

Purdue: The Boilermakers have held 14 consecutive opponents to 72 or fewer points and the scoring punch of the rapidly improving freshmen have been the perfect combination to build momentum. Purdue also happens to be 13-1 inside Indiana this season and will play the rest of this season in the state, too.

Purdue: Wheeler finished with 11 points and six rebounds. Williams had nine points and seven rebounds. ... The Boilermakers were 5 of 14 on 3s and committed just 10 turnovers. ... Purdue outscored Wisconsin 36-20 in the paint.

Before the national anthem was played, Purdue officials paid tribute to longtime radio voice Larry Clisby by playing a video on the main scoreboard. Clibsy died Saturday at his home in Florida. He was 74. Clisby was diagnosed with Stage 4 lung and metastatic brain cancer in June 2018 and retired before the start of this season. He called 1,189 games during a career that spanned nearly 40 years. and included his induction into the Indiana Sportswriters and Sportscasters Hall of Fame in 2018.

Wisconsin: Closes out the regular season Sunday at No. 5 Iowa.