Hard times on Hawk Hill: Martelli out at SJU after 24 years 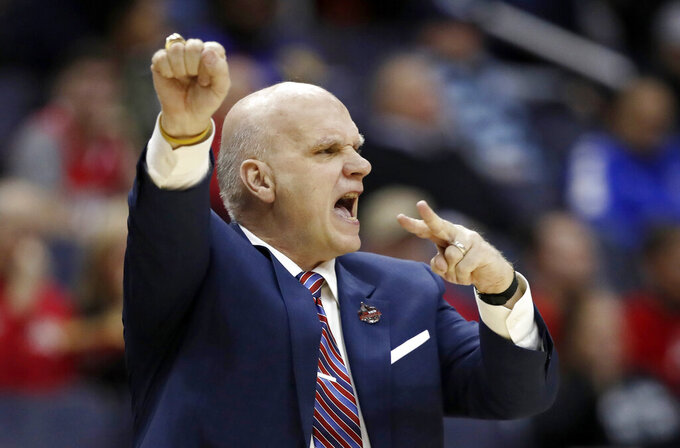 FILE - In this March 10, 2018, file photo Saint Joseph's head coach Phil Martelli directs his team during the first half of an NCAA college basketball semifinal game against Rhode Island in the Atlantic 10 Conference tournament in Washington. Saint Joseph's fired Martelli on Tuesday, March 19, 2019, after 24 seasons. The 64-year-old Martelli became head coach in 1995 after 10 years as an assistant. (AP Photo/Alex Brandon, File)

PHILADELPHIA (AP) — Phil Martelli heckled a CBS broadcaster, rose from a coffin on his own TV show, picked the Eagles to win the Super Bowl at a chicken wing eating contest and turned a tiny school in Philadelphia into the talk of college basketball.

Martelli was certainly never boring over a 24-year run as coach at Saint Joseph's, and was never better than in 2003-04 when he led the Hawks to a No. 1 ranking in The Associated Press poll, a No. 1 seed in the NCAA Tournament and a run to the Elite Eight.

Martelli could never duplicate that season in the spotlight, and a string of losing seasons finally caught up the popular coach perched on Hawk Hill.

Saint Joseph's fired the 64-year-old Martelli on Tuesday following a third straight losing season (14-19 this season) and with the Hawks making only three NCAA Tournament appearances since 2004.

"Coach Phil Martelli stands among out among his peers in college basketball not only for his long tenure and the many accolades that he and his teams have achieved, but also for his engagement with the community and his service as an ambassador for SJU," the school said in a statement. "The University recognizes and celebrates the history and heart that Coach Martelli brought to the program and thanks him for his long service, dedication and stewardship."

Saint Joseph's athletic director Jill Bodensteiner was hired last March and will make the first major decision of her tenure.

"I did an analysis of this year, primarily, and decided we weren't helping those student-athletes maximize their potential, individually or as a team," she told the AP. "I didn't feel like we were giving the student-athletes an optimal chance to succeed."

Bodensteiner said it was "excruciating" to let go of a Saint Joseph's great.

"I promised everyone that they'd know where I stood, and I feel confident that's the case with Phil, as well," she said. "But is it always a surprise? It's always a surprise. There's no way you can soften the blow."

Hawk Hill won't be the same without the bald, big-bellied and quick-quipped Martelli. He's a Philly lifer and the second seasoned Big 5 coach to leave at the end of the season: Fran Dunphy will retire from Temple at the end of the NCAA Tournament. Jay Wright, who has won two national championships at Villanova, is now the dean of Philadelphia's six Division I coaches.

Asked if Martelli was given a chance to retire on his own terms, Bodensteiner said, "I'll let Phil tell that story, out of respect for him."

Martelli declined to comment to the AP and said he was spending the day with his family.

So who's next? Bodensteiner said she wanted a coach that could "build a culture" and hoped to hire Martelli's replacement "as quickly as I can."

Martelli set single-season and career assist marks as a point guard at Widener in the 1970s, coached high school basketball in the Philly area and joined the Saint Joseph's staff as an assistant coach in 1985. After 10 years as an assistant, Martelli was named the 14th coach of the private Jesuit school in 1995 and led the Hawks to the Sweet 16 in just his second season.

But Martelli, a sports talk radio regular and tireless fundraiser for Coaches vs. Cancer, forever stamped his legacy with the 2003-04 season. He recruited Jameer Nelson and Delonte West, both NBA first-round picks, and they dominated as perhaps the top backcourt in Philadelphia basketball history. The Hawks opened the season with 27 straight wins. They reached No. 1 in the AP poll and were a No. 1 seed in the NCAA Tournament for the first time. Nelson was on the cover of Sports Illustrated.

During that season, Martelli snapped at a St. Bonaventure fan who questioned why the Hawks were pressing the Bonnies despite enjoying a 25-point lead, and called the woman a "moron" and a "nitwit."

Martelli opened the Fieldhouse doors to all that stopped by — the growing horde of national media, students, anyone — so they could come along for the ride and get a taste of the madness that enveloped campus that season.

"It's really kind of an amazing feat, but it just kind of fits the description of the year," Martelli said when the Hawks hit No. 1 in the AP poll. "It's been so surreal all season long."

The craziness continued in March when CBS analyst Billy Packer went on the live selection show and rattled off several teams that he felt were more deserving of a No. 1 seed in the tourney than the mid-major Hawks. Martelli shot back, calling the announcer a "jackass." The Hawks lost to Oklahoma State in the East regional final and finished 30-2. Martelli would win AP coach of the year honors.