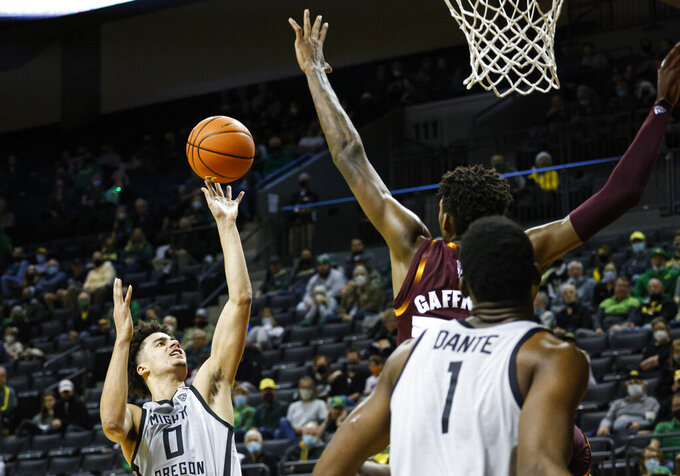 Heath made 4 of 6 from 3-point range and finished with 14 points and Kimani Lawrence scored 13 for Arizona State (3-6, 1-1 Pac-12). The Sun Devils snapped a seven-game losing streak in Eugene and won their first game at Matthew Knight Arena.

Lawrence made a layup to open the scoring in OT before Jalen Graham grabbed an offensive rebound and kissed a putback high off the backboard to give Arizona State a 64-60 lead about 90 second in. Franck Kepnang made a layup and about a minute later threw down a dunk to give Oregon a one-point lead. Heath answered with a layup but Kepnang scored from point-blank range to make it 67-66 and then took a charge on the other end, drawing Graham's fifth personal foul. After Oregon missed a 3-point shot, Heath hit a deep 3-pointer with 11 seconds to go to cap the scoring.

Heath, on a screen-and-roll, led Graham with a bounce pass to the rim for a two-hand dunk and Harmon was called for an offensive foul with 45 seconds left in regulation. Graham made the first of two free throws to pull Arizona State within a point 15 seconds later but Kepnang hit two foul shots to make it 60-57 with 29 seconds to go. Heath missed a 3-point shot with 11 seconds remaining but Graham grabbed the offensive rebound and passed it to Horne for a catch-and-shoot 3 to make it 60-all and force overtime.

Arizona State, which scored 29 points in a 22-point loss to Washington State last Wednesday, is the only Power 5 team Oregon has played this season.