Jayhawks head to Final Four with 2020 still on their minds 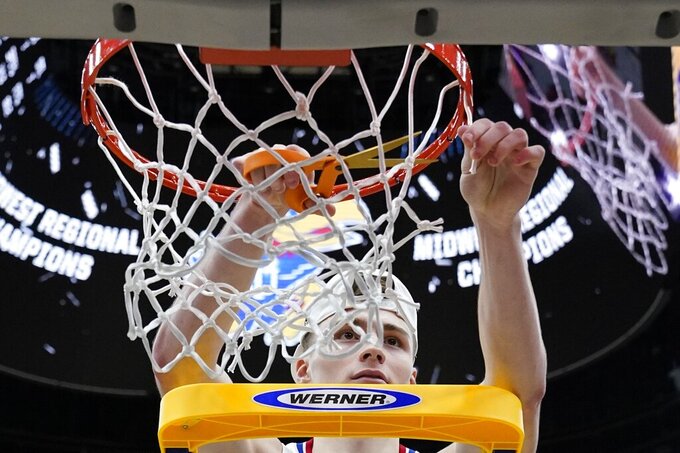 Kansas' Christian Braun cuts down the net after a college basketball game in the Elite 8 round of the NCAA tournament Sunday, March 27, 2022, in Chicago. Kansas won 76-50 to advance to the Final Four. (AP Photo/Nam Y. Huh) 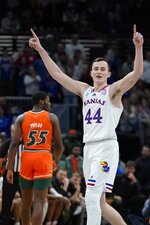 LAWRENCE, Kan. (AP) — Christian Braun's eyes opened wide when he learned that after Kansas had beaten Miami to return to the Final Four such a raging party had broken out back in Lawrence that authorities had to shut down Massachusetts Street, the popular bar and restaurant district near campus.

It was a much more welcome shutdown than the one Braun experienced two years earlier.

Braun and his teammates were sitting in their hotel room in downtown Kansas City in 2020, waiting to play in the quarterfinal round of the Big 12 Tournament, and news began filtering out that it had been canceled because of a virus few knew anything about. In short order, the NCAA Tournament also was shut down, and what may have been one of the best teams Jayhawks coach Bill Self had ever assembled would never have a chance to prove it.

“We all knew we were a pretty good team that year. We were No. 1 for a long time,” said Braun, who was a role player as a freshman in 2020, but is now one of the star players for a team that is headed back to the national semifinals.

“For it to get canceled like that,” Braun said, “that kind of sucked for a while."

The what-might-have-beens may never go away entirely.

After all, the Jayhawks spent four weeks at No. 1 and were there for the final Top 25 poll, the closest anybody would get to being crowned national champion. They lost just three games all season: to No. 4 Duke in the Champions Classic in New York, to No. 18 Villanova in Philadelphia and to Baylor, which by then had risen to No. 4, at Allen Fieldhouse.

Coincidentally, the Blue Devils and the Wildcats will be joining the Jayhawks in New Orleans this weekend.

That loss to the Bears came on Jan. 11, 2020, and despite a few close shaves the Jayhawks never lost again that season. They rolled through the rest of their Big 12 schedule, going 17-1 to win the championship in a landslide, and they almost certainly would have been the overwhelming choice to be the No. 1 overall seed for the big dance.

“We had arguably as good a team as anybody,” Self acknowledged Tuesday.

The Jayhawks were built to win in March, too.

They had peerless point guard play from Devon Dotson and a game-changing post player in Udoka Azuibike, both of whom would be voted second-team All-Americans and are now playing professionally. They had role players such as Braun and Ochai Agbaji, and a defensive stopper in Marcus Garrett, along with depth across the board.

“We had a lot of great pieces,” Kansas big man David McCormack recalled, “and felt like we could go really far.”

Instead, the group largely disbanded after the season, the inexorable turnover of college basketball yielding a far different team last year. Despite many of the same faces, it was one that struggled to the bitter end, when it was pounded by Southern California in the second round of an NCAA Tournament played entirely inside an Indianapolis bubble.

“Losing that game last year in the tournament didn't feel good for us, either,” Braun said.

So combine the missed opportunity of playing for a title in 2020 with a disheartening dud in 2021 and, well, it's not much of a surprise that the top-seeded Jayhawks have been on a mission this March.

They blew out Texas Southern in the opening round, then skated past Creighton and Providence with only a few hairy moments along the way, then routed the Hurricanes last weekend to punch their ticket to the Big Easy.

Agbaji and McCormack were sophomores two years ago and are the grizzled seniors this year. Braun is a junior who has been playing crucial minutes since he stepped on campus. Jalen Wilson, who played in just two games during the 2019-20 season because of an injury, has become one of their most important players during this year's run.

Next up for them is Villanova, a familiar NCAA Tournament foe, on Saturday night at the Superdome. The Jayhawks lost to the Wildcats in the Final Four in 2018, long before the pandemic turned everything upside down.

“It was definitely a heartbreak feeling knowing that we definitely clawed our way to the top that year,” McCormack said of that COVID-canceled postseason. “Now this year feels like we’re avenging that year. Now that we have the opportunity, we’re going to make the most of it and just continue to grow as a team with each game. And just do what we weren’t able to do or didn’t have an opportunity to do within that 2020 year.”