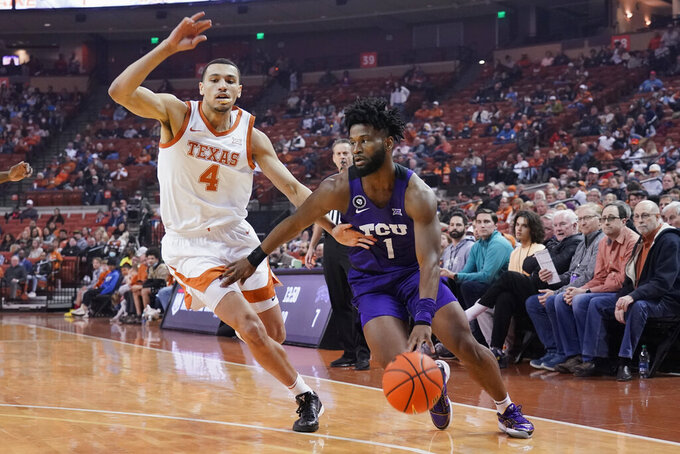 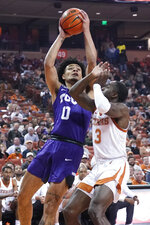 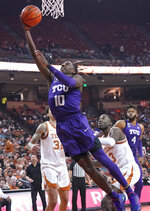 AUSTIN, Texas (AP) — Time and again, Texas has turned to Andrew Jones to provide the offense to rescue the Longhorns from a loss.

They did it Wednesday against TCU, and the sixth-year guard delivered the big baskets again in arguably the best stretch of scoring in his career.

Jones scored 21 points, sparking the key run in the second half that pulled the No 20 Longhorns out of a 10-point deficit before Texas pulled away for a 75-66 victory. Jones has scored at least 20 points in three consecutives games for the first time in his career.

“I think he’s a scorer ... I don’t think he’s necessarily just a shooter," first-year Texas coach Chris Beard said. “To win games in March, you've got to have players. Tonight was one of the better games I've seen him play. I don't think he made a 3-point shot and he puts 21 on the board."

Texas trailed 48-38 with just over 13 minutes to play and was sputtering on offense before Jones and lock-down defense created the game-changing run.

Jones started it with a twisting layup on a three-point play and followed it with a short jumper. Texas forced four turnovers before Jones converted another three-point play in transition, giving Texas a 53-50 lead. Jones also had just one turnover in nearly 35 minutes on the court and went 7 of 8 from the line.

“We just couldn’t seem to turn the tide and get it back," TCU coach Jamie Dixon said. “They were certainly the more physical team. They knocked us all over the place especially in the second half.”

Jones, who is his sixth season after recovering from leukemia diagnosed in his sophomore season, saw his teammates needed someone to lead the way if they were going to avoid a second consecutive home loss.

“We were losing and we needed to get downhill. I hadn't hit a jumper," Jones said. “I knew once my teammates saw me being aggressive, they'd be like, ‘If you can do it, I can do it too.’ I feel like it triggered some spark.”

TCU: The Horned Frogs were on the verge of a big win they needed to boost their postseason position. But the first-half shooting bonanza dried up and a rash of turnovers began just when Texas was making its run for a season sweep of the Horned Frogs. TCU scored just 16 points over the final 11 minutes.

Texas: The Longhorns got huge bounce-back games from Carr and Allen who were non-factors in a tough loss to Texas Tech a few days earlier. Carr was scoreless against the Red Raiders and Allen had just six points as Texas was outscored in the paint in that game 26-10. Carr shot 6 of 14 and Allen had a team-high seven boards against the Horned Frogs.

Texas scored 38 in the paint against the Horned Frogs, with a bunch coming from Carr's drives inside.

“I still have nightmares about that Tech game,” Carr said. “I’ll just try to keep learning from it and play better going forward.”

Texas topped 70 points for just the third time in eight games despite shooting just 1-of-14 on 3-pointers, and that one came in the first 2 minutes ... Texas was 24 of 29 on free throws compared to 8 of 11 by TCU ... Texas scored 30 points off 17 TCU turnovers ... TCU made five 3-pointers in the first half but just one in the second.

Texas: At West Virginia on Saturday, followed by hosting No. 10 Baylor on Monday.