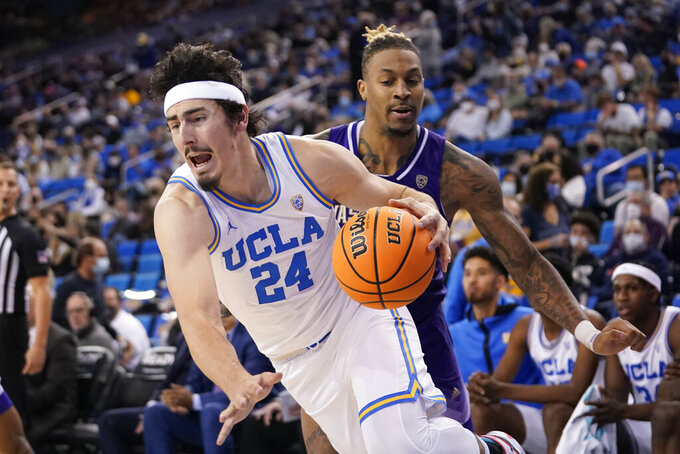 With two of the Pac-12's best players back and a sterling freshman class, the No. 8 Bruins have their sights set on a second Final Four in three years — maybe even the program's 12th national championship.

Yes, they should be that good.

The Bruins lead the pack in a Pac-12 that has undergone a resurgence in recent years.

The conference had three teams reach the Elite Eight in 2021, including UCLA's Final Four run, and had two more reach the Sweet 16 last season.

The top half of the Pac-12 appears to be strong again, with UCLA, No. 17 Arizona and No. 21 Oregon in the preseason AP Top 25, and several other teams expected to make strong NCAA Tournament pushes.

David Singleton and Jaylen Clark also return, and they'll be joined by a 2022 recruiting class ranked 12th nationally in the 247 Sports composite.

Amari Bailey, an athletic 6-foot-5 wing, was the No. 10 recruit in the class and Adem Bona, a strong, athletic 6-10 center from Nigeria, was No. 17. Add in fast point guard Dylan Andrews and the Bruins will likely be the favorites to win the Pac-12 and possibly make a deep run in the NCAA Tournament.

Tommy Lloyd had a stellar first season in the desert, leading Arizona to a Pac-12 title and a trip to the Sweet 16 while racking up several national coach of the year honors.

The Wildcats lost three players to the NBA for the second straight season, but have a strong core returning and added several veterans who should contribute right away.

The core is headed by forward Azuolas Tubelis, feisty point guard Kerr Kriisa and sweet-shooting Swede Pelle Larsson. French wing Adama Bal is expected to have a much bigger role this season and the Wildcats are banking on powerful big man Oumar Ballo continuing his improvement since following Lloyd from Gonzaga.

“We have some really good players,” Lloyd said. “As a team we still have to put everything together, but at the end of the day we’re going to be really hard to beat.”

Oregon labored through the 2021-22 season with a team that struggled defensively and with team chemistry.

Dana Altman has added several new pieces to his roster, including several veteran players and a five-star big man, that should put Oregon near the top of the Pac-12 again after missing the NCAA Tournament last year.

Streaky-shooting guard Will Richardson is back and expected to take on a leadership role. The Ducks also are expecting bigger contributions from former Syracuse transfer Quincy Guerrie and 6-11 forward N’Faly Dante, who battled injuries last season.

Colorado transfer Keeshawn Barthelemy and South Carolina transfer Jermaine Couisnard should be steadying influences, and 7-foot freshman Kel’el Ware was the No. 7 overall prospect in the 2022 recruiting class.

“There are lots of different ways to play the game, but we feel that certain things have been successful for us in the past, and, hopefully, we’re trying to establish those,” Altman said.

Southern California no longer has a Mobley brother on the roster now that Isaiah is gone, but the Trojans have enough to make a deep March run.

Boogie Ellis and Drew Peterson are back, and coach Andy Enfield signed three top-50 recruits, led by athletic 7-footer Vincent Iwuchukwu. It may take some time for the new players to jell, but don't be surprised if USC is contending for a Pac-12 title by the end of the season.

Arizona State has gone through two up-and-down seasons since the pandemic wiped out what was sure to be a third straight NCAA Tournament appearance under Bobby Hurley.

Hurley restocked his roster with veteran players who will join a strong returning core, led by last year's leading scorer DJ Horne. It could be an NCAA-or-bust season for Hurley in the desert, but he has the pieces to pull it off.

Stanford has yet to reach the NCAA Tournament in seven seasons under coach Jerod Haase, but that could change this year.