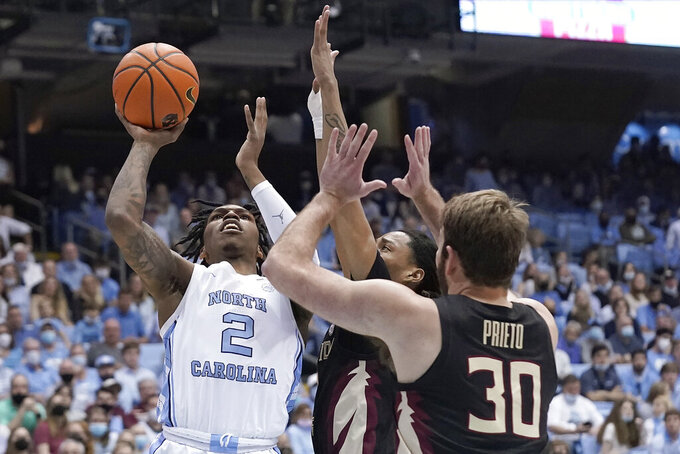 CHAPEL HILL, N.C. (AP) — Caleb Love scored 18 points and North Carolina used a dominating first half, including scoring the first 18 points of the game, to roll to a 94-74 win over Florida State on Saturday.

Amando Bacot had his 19th double-double with 17 points on 7-of-9 shooting and 14 rebounds for the Tar Heels (18-7, 10-4 Atlantic Coast Conference). RJ Davis and Brady Manek both added 16 points.

North Carolina made 7 of 10 shots, including three 3s and a three-point play, while FSU missed its first nine shots with three turnovers before making a free throw at the 13:03 mark. Love had two 3s and Leaky Black the and-one.

Cam'Ron Fletcher made Florida State's first basket at 11:32, making the score 24-3. The Seminoles missed 10 shots and had four turnovers, while only grabbing three rebounds, although UNC didn't provide many opportunities on the boards, shooting 11 of 14 through the first 10 minutes.

Meanwhile the Seminoles shot 30% with eight turnovers and were outrebounded by 11.

Fletcher scored 16 points with 10 rebounds and RayQuan Evans scored 13 for Florida State (13-11, 6-8), which lost its sixth straight after winning five straight, including an overtime win over Duke. FSU has been struggling with injuries and lost leading scorer Caleb Mills (13.3) to an ankle injury 7 1/2 minutes into the game.