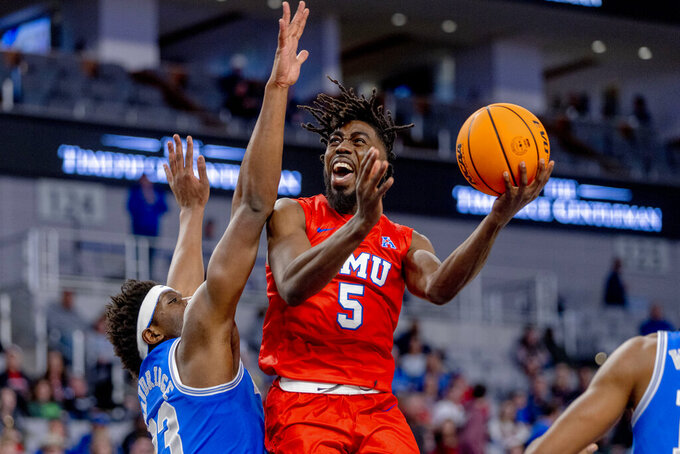 SMU guard Emmanuel Bandoumel (5) drives to the basket against Memphis center Malcom Dandridge (23) during the first half of an NCAA college basketball game in the semifinals of the American Athletic Conference tournament in Fort Worth, Texas, Saturday, March 12, 2022. (AP Photo/Gareth Patterson)

FORT WORTH, Texas (AP) — Lester Quinones hit a long contested 3-pointer to put Memphis ahead and the Tigers held on to beat SMU 70-63 in an American Athletic Conference tournament semifinal game on Saturday.

The shot by Quinones with 4:37 left made it 60-57 and was only the third lead change in the game matching teams still trying to ensure making the NCAA Tournament. But it broke the last of six ties over a seven-minute span.

Landers Nolley II and Alex Lomax had 12 points each to lead Memphis (21-9), which won its sixth game in a row and 11th of 12 in a stretch where the only loss was to the Mustangs. Quinones had 10 points and eight rebounds, while DeAndre Williams had seven points and 10 rebounds.

Marcus Weathers had 16 points for SMU (23-8). Michael Weathers had 12 points, as did AAC player of the year Kendric Davis on 3-of-13 shooting.

Tigers center Jalen Duren, the 6-foot-11 freshman who was a first-team All-AAC pick, had nine points and seven rebounds in only 17 minutes. He got two fouls in the first 3 1/2 minutes of the game, and didn't return until after halftime, when he exited for 6 1/2 minutes after falling hard to the floor after blocking a shot by Davis.

Memphis, which won both regular-season games against regular-season AAC champion Houston, plays the top-seeded Cougars in the tournament final on Sunday.