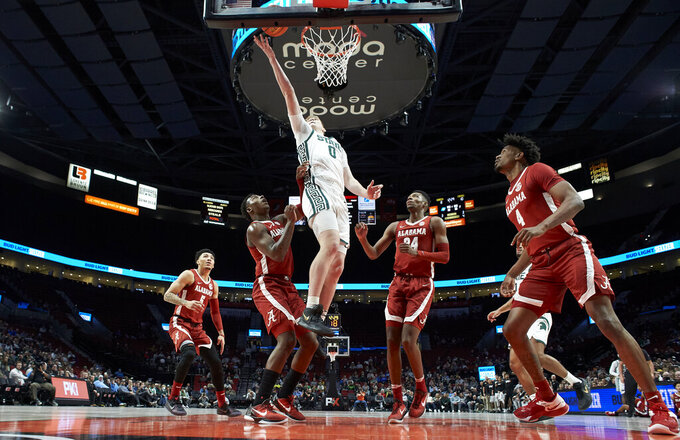 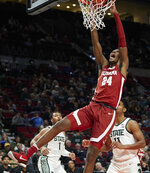 PORTLAND, Ore. (AP) — Freshman Brandon Miller carried Alabama through the first 20 minutes, capping his big half with a 30-footer at the buzzer.

Miller got some help in the second half and the Crimson Tide picked up an impressive early season victory.

Miller scored 17 of his 24 points in the first half and No. 18 Alabama pulled away to beat No. 12 Michigan State 81-70 on Thursday night in the opening round of the Phil Knight Invitational.

After a rather light schedule for the first couple of weeks, Alabama (5-0) passed its first test of the season against the short-handed Spartans (3-2).

“All in all, he had a pretty good game. He needs to play well for us to be at our best,” Alabama coach Nate Oats said.

Miller, the top scoring freshman in the country at more than 20 points per game, was terrific in the first 20 minutes before getting scoring help in the second half. He capped his big first half hitting a 30-footer at the buzzer to give the Crimson Tide a 42-37 lead at the break.

“I definitely thought the 3 that I hit was an energy booster for me and the team,” Miller said. “We could have started of better but things happen. I felt like that was a change of the game.”

Tyson Walker led Michigan State with 21 points and A.J. Hoggard added 18. Scoring leader Joey Hauser had several hard falls to the court and was just 1 of 6 shooting. He finished with nine points.

Michigan State also played without starting forward Malik Hall after the school announced he would be sidelined for about three weeks due to a stress reaction in his left foot. The Spartans were also without guard Jaden Akins due to an ankle injury.

“I'm disappointed to lose the first game of a tournament. But under the circumstances that these guys find out a day or two ago that you’re not going to have maybe a guy who’s playing the best, and definitely a guy that would have matched up with Miller," Michigan State coach Tom Izzo said.

Alabama slowly extended its halftime lead but it was a three-minute sequence where the Tide finally built a cushion. Quinerly hit a 3-pointer from the wing to push Alabama’s lead to 11. Jaden Bradley followed by intercepting a pass at midcourt and his layup gave the Tide a 62-49 lead with 11:50 left.

After a timeout, Quinerly finished a driving layup, Nimari Burnett hit a 3 and Alabama had its biggest lead at 18. The Spartans closed within eight in the closing minutes but couldn’t overcome 33% shooting in the second half.

Alabama: The athleticism of the Crimson Tide was on display from the start. Alabama’s first three made baskets were dunks and it had five for the game.

Michigan State: The Spartans continued their brutal early-season schedule with a third game against a ranked opponent. The Spartans have already played two teams ranked in the top five at the time of their meeting facing then No. 2 Gonzaga and then No. 4 Kentucky.

Alabama: Will face No. 20 UConn in the semifinals Friday.

Michigan State: Will face Oregon in a consolation game Friday.