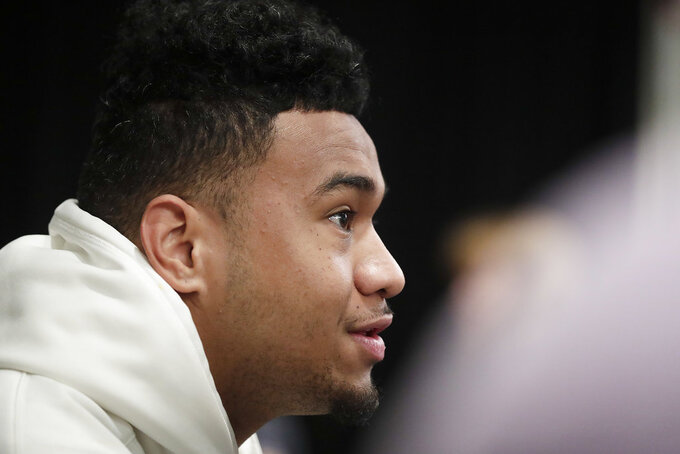 FORT LAUDERDALE, Fla. (AP) — Oklahoma's Kyler Murray and Alabama's Tua Tagovailoa have struck up a friendship over the past several weeks, which shouldn't be surprising considering how much time the quarterbacks have spent alongside one another in that span.

They were in Atlanta together at a college football awards show, where Tagovailoa took home the Maxwell Award.

They were in New York a few days later for the Heisman Trophy presentation, where Murray claimed the top prize.

So maybe it's fitting that they'll both be center-stage again — this time, at Saturday's Orange Bowl, where a berth in the College Football Playoff championship game awaits one of them. Murray and the fourth-ranked Sooners (12-1) will meet with Tagovailoa and the top-ranked Crimson Tide (13-0), with the new friends set to become foes for a few hours.

"You know, it's football. We all understand the level of respect we have for each other," Tagovailoa said Wednesday. "We understand it's just competition. Off the field, it's a lot different. But on the field, you've got to go out there. It's your job. You've got to compete for your team, for the university, for the state."

And this time, for a shot at the national title.

They were supposed to share the spotlight Wednesday morning at a media availability, but Murray was a late cancellation because of an undisclosed illness — one that doesn't seem to worry the Sooners too much. Offensive coordinator Cale Gundy didn't even know Murray was sick until he got into the car that took the Sooners to the interview site and realized his Heisman winner wasn't along for the ride.

Tagovailoa was walking without a limp Wednesday and declared his surgically repaired right ankle — it was scoped earlier this month to accelerate the healing of a high sprain — to be at about 80 to 85 percent. But now it's Murray whose health status seems to be an issue, at least on some level.

It has been a whirlwind few weeks for Murray, and it's easy to see why he might be feeling a little worn down right now. Oklahoma got its bid to the CFP field on Dec. 2, and over the three weeks since all Murray has had on his plate is the award shows, finals, bowl practice, traveling to South Florida, debating his baseball-or-football-or-both future, and the not-so-small matter of prepping to face the defending national champions.

The Sooners and coach Lincoln Riley went through a similar pre-CFP hectic time last year, when Baker Mayfield won the Heisman. Given that, Murray probably had a good idea what these days would be like.

"He's got a very cool, calm demeanor about him and he's handled it extremely well," Gundy said. "Obviously, you credit that a lot to coach Riley and having the opportunity to go through it with Baker. But Kyler's personality and demeanor and everything is just very, very steady and level. He's handled it very well."

Murray and Tagovailoa are the two most-decorated players in the nation this year, and finding separation between them is difficult.

Oklahoma has the No. 1 scoring offense in the country at 49.5 points per game; Alabama is No. 2 at 47.9. Murray led the nation in pass efficency, with Tagovailoa No. 2 and both were well ahead of everyone else on that list. Tagovailoa was No. 1 nationally in yards per completion at 16.85; Murray was right behind him at 16.82.

They're not playing 1-on-1 on Saturday, of course.

But Tagovailoa is looking forward to the matchup, and expects Murray feels exactly the same way.