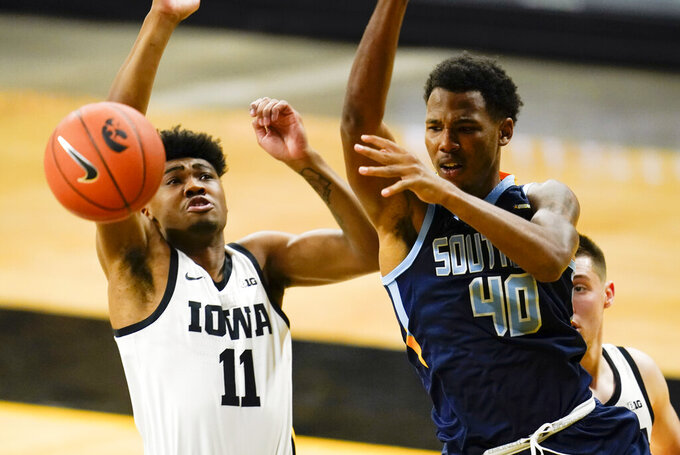 The Iowa center came close to that in the fifth-ranked Hawkeyes' 103-76 win over Southern on Friday.

Garza scored 41 points, missing just one shot early in the second half. He was 14 of 15 from the field, making all three of his 3-point attempts, and was 10 of 12 on free throws. He also had nine rebounds and three blocked shots in 29 minutes.

It was the 18th consecutive game of 20 or more points for Garza, the lone unanimous selection to the AP preseason All-America team.

“Whenever I get the ball, I feel like I can score,” Garza said. “Sometimes you have those days where you’re just making shots. I put enough work into each shot that when I put it up, I have a strong feeling that it’s going to go in.

“That’s a big number,” coach Fran McCaffery said. “Kudos to our guys to realize he had it going, and load him up.”

“I mean, he’s terrific,” forward Joe Wieskamp said. “He’s a terrific player, and he’s going to be like that all season long.”

“We moved the ball around well, and I was able to get some touches,” Garza said. “Whenever I get the ball, I feel like I can score.”

What McCaffery appreciated the most was Garza's perfect 3-point shooting.

“He’s just been killing the 3-ball, shooting it with confidence,” McCaffery said of the 6-foot-11 senior.

Garza’s perfect run ended when he missed a shot 28 seconds into the second half.

The Hawkeyes scored 15 of the game’s first 17 points. Southern got to within 17-13 before Iowa pulled away behind Garza.

Garza opened the game with a 3-pointer and had 11 of Iowa’s first 17 points.

Iowa’s single-game scoring record is 49 points, set by John Johnson in a 1970 game against Northwestern. Garza and Johnson are the only two Hawkeyes with two 40-point games. Garza scored the most points by a Hawkeye in a game at Carver-Hawkeye Arena, beating the previous record of 36 by Adam Haluska (2006) and Rob Griffin (2000). The arena record is 45 points by Brian Quinnett of Washington State (1986).

Iowa played its second game without forward Jack Nunge, who is out indefinitely after the death of his father on Saturday. Nunge missed almost all of last season with a knee injury.

Southern’s schedule doesn’t get any easier — the Jaguars play at top-ranked Gonzaga on Thursday.

Iowa gets a third consecutive home game on Thursday, when the Hawkeyes face Western Illinois.