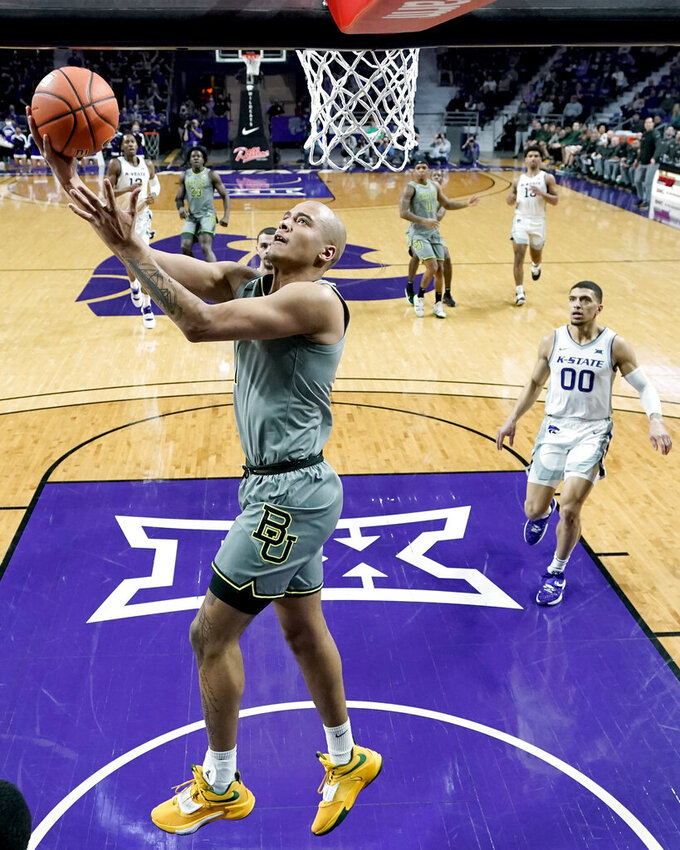 Baylor forward Jeremy Sochan puts up a shot during the first half of an NCAA college basketball game against Kansas State Wednesday, Feb. 9, 2022, in Manhattan, Kan. (AP Photo/Charlie Riedel) 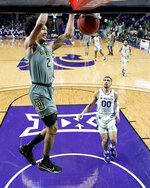 Before the current streak, Baylor had won 20 games only three times in 100 seasons.

“Any Big 12 win is a good one, especially after the last game we played,” Baylor coach Scott Drew said of Saturday’s 83-56 loss at Kansas. “We wanted to have a better performance. I thought the first half we didn’t execute as well as we’d like.

“I thought the second half we did a great job and looked a lot more like ourselves. The bench was outstanding."

Both teams were missing key contributors.

LJ Cryer, who leads the Bears in scoring at 13.9 points per game, missed his fourth straight game with a foot injury. Selton Miguel sat out his fourth in a row for the Wildcats with an ankle injury.

“We are not a one-man team,” Tchamwa Tchatchoua said. “We don’t just have one leader. Every night a different guy steps up. I’m not a vocal leader. I lead by example. It’s what everybody brings.”

“When we’ve won we’ve had balance,” Wildcats coach Bruce Weber said. “We’ve had four guys in double figures. We just needed a couple more guys to give us a little bit more.

“Nijel was exhausted. We had no choice but to keep going to him. Obviously, Tchatchoua loves to play against us.”

K-State’s two biggest losses this season have come against the Bears, including a 74-49 defeat at Baylor on Jan. 25.

Baylor outscored the Wildcats 7-1 to start the second half. K-State’s chances were dimmed considerably when Markquis Nowell picked up two quick fouls and was sent to the bench with four at the 17:43 mark of the second half. The second-half surge eventually extended to 19-4 Baylor.

“We held them to 39%, which means you get a lot of stops and you get into transition,” Drew said. “Our second-chance points, we flipped them from our last game. Our transition defense was a lot better today.”

Baylor led 39-21 at halftime of the first game, but K-State played a much better first half Wednesday. The Wildcats led 20-13 before the teams went into halftime tied at 34. Baylor’s largest lead in the first half was two points.

Pack and Smith had 13 points each for the Wildcats. Baylor was led by Kendall Brown and Tchamwa Tchatchoua with eight points apiece.

Baylor held a 20-13 advantage on the boards.

Baylor: The Bears continued their recent domination of Kansas State. Baylor has outscored K-State 430-305 (86-61 average) over the past five games.

Kansas State: The Wildcats keep stubbing their toes when they get into “bubble” consideration for the NCAA Tournament.

Baylor hosts No. 20 Texas on Saturday.

Kansas State plays at Iowa State on Saturday afternoon in the first matchup of the season between the schools.