No. 10 Kentucky looks to veterans, transfers for title run 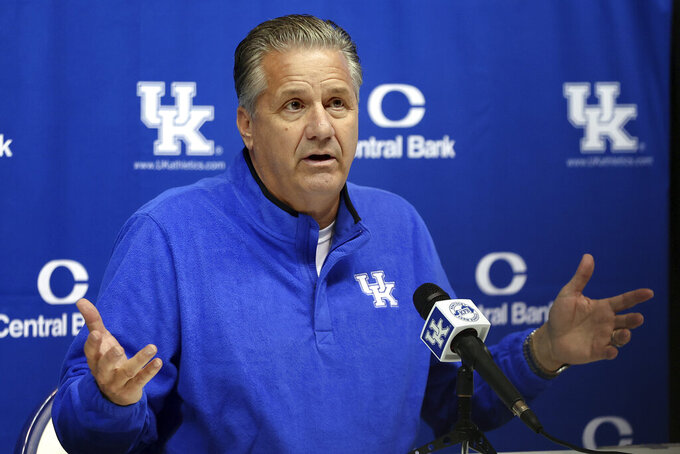 LEXINGTON, Ky. (AP) — John Calipari’s enthusiasm and optimism about his Kentucky squad comes from having his most experienced Wildcats roster in a while.

Yes, Calipari once again landed a couple of heralded freshman recruits. But they’ll be outnumbered by a veteran core comprised of several holdovers and a handful of transfers. All of them will be counted on to help No. 10 Kentucky bounce back from its worst finish in nearly a century.

The Wildcats were 9-16 last season -- a year Calipari won’t bother reflecting on.

“Last year is a blip,” Calipari said on media day. “That’s so far behind me, what we went through. I learned from it and you move on.

“What I like about this group, they’re competing against each other. Let me say this: Yes, we do have depth.”

It starts with sixth-year guard Davion Mintz (11.5 points per game), who returns for an extra season after being the offensive bright spot on a team that struggled to shoot. Juniors Keion Brooks Jr. and Jacob Toppin and sophomore Lance Ware are back in the frontcourt, while redshirt guard Dontaie Allen looks to build off promising flashes as a redshirt freshman.

They welcome a seasoned group of newcomers, including several with Power 5 resumes.

Calipari as usual warned of potential early struggles with another roster makeover, though the Hall of Fame coach is encouraged by crisp preseason workouts.

The pandemic limited practices and interaction last season and the lack of cohesion showed as Kentucky missed the NCAA Tournament for the first time since 2013. This year’s outlook is much brighter.

“It has been significant,” Mintz said of the transfers’ impact. “Having older guys come in, just the maturity level, the way we’re able to have a feel for each other at an early stage like this is going to (make) a difference for the season.

“You just have guys that have seen different things and that is helping us a lot.”

Calipari hints at potentially playing four guards this season, all of whom can run the point and shoot. The 5-foot-9 Wheeler in particular boasts impressive credentials, setting a Georgia single-season record with 193 assists and leading the Southeastern Conference with 7.4 assists per game. He also averaged 14 points per contest.

Grady, 6-5, scored 2,000 points at Davidson and was an All-Atlantic 10 Conference first team selection. Mintz led Kentucky with 56 3-pointers on 38% shooting, more than half coming in the final eight games.

Oscar Tshiebwe might be the most eager Wildcat after being a spectator for the second half of Kentucky’s disappointing spring. The 6-foot-9 Congo native has bulked up to 255 pounds, and practicing against 7-footer Olivier Sarr familiarized him with Calipari’s expectations of post players asserting themselves.

“He puts you in a situation where you might be uncomfortable during practice, but it’s to make you comfortable with itm” Tshiebwe said. “I’m getting more comfortable now, and I’m so excited to get through the season to show people the stuff I’ve been working for.”

Calipari brought back a familiar face in associate coach Orlando Antigua, a Kentucky assistant from 2009-14 before becoming head coach at South Florida. Also new to the bench are Ronald “Chin” Coleman, who came with Antigua from Illinois. Calipari’s son, Brad, and ex-Wildcat Riley Welch are graduate assistants. Former assistant Tony Barbee left in the offseason to become head coach at Central Michigan.

Kentucky opens on Nov. 9 against No. 9 Duke in the Champions Classic in New York’s Madison Square Garden. The non-conference docket includes consecutive games against Notre Dame (Dec. 11), Ohio State (Dec. 18) with a home meeting against rival Louisville on Dec. 22. The Wildcats open SEC play against Missouri on Dec. 29 and will visit fellow heavyweight Kansas a month later in the Big 12/SEC Challenge.