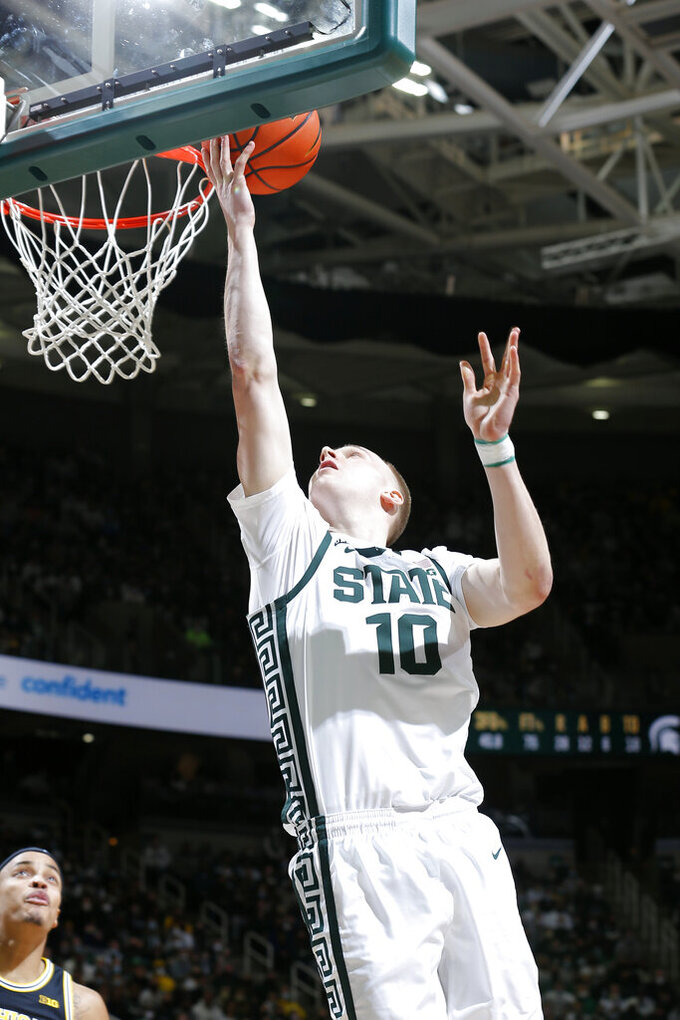 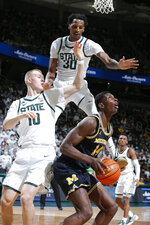 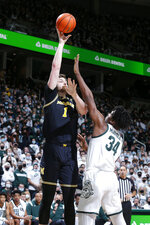 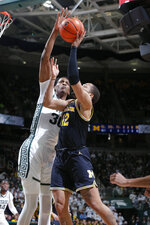 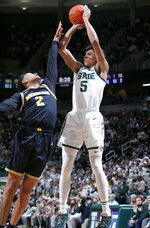 EAST LANSING, Mich. (AP) — No. 10 Michigan State sent waves of players at its rivals and there wasn't much Michigan could do about it.

Max Christie scored 14 of his 16 points in the first half and reserve Malik Hall finished with 15 points, leading the Spartans to an 83-67 win over the Wolverines on Saturday.

“One of our main keys was really to wear them down," Christie said.

Michigan State (16-4, 7-2 Big Ten) pulled away by outscoring Michigan 14-3 early in the second half and didn't have trouble keeping a comfortable cushion.

The Wolverines (10-8, 4-4) started strong, leading by as much as six in the first half. Michigan trailed by just four at halftime, but missed its first eight shots in the second half and failed to bounce back at either end of the court.

“They came out the most aggressive team, the most physical team," coach Juwan Howard said.

Michigan's Hunter Dickinson had 14 of his 25 points in the first half. He didn't score in the second half until he went to the line with 7:56 left and he went on to quickly score six points to pull the Wolverines within 11 points.

Caleb Houstan and Moussa Diabate scored 11 each for the Wolverines.

“We competed, but we didn’t compete for 40 minutes," Howard said.

The Spartans' bench was outscoring Michigan’s 20-0 at one point early in the second half, a key factor that allowed them to overcome leading-scorer Gabe Brown being held scoreless for nearly 27 minutes.

Michigan State’s Joey Hauser scored 14, A.J. Hoggard had 11 points and a career-high 10 assists. Not counting the double-digit scorers, four other players made at least two shots for the Spartans. Even Keon Coleman, who plays wide receiver for the Spartans, made a layup late in the game when Izzo emptied his bench.

Michigan: It's difficult to win when shooting just 37% as Howard's team found out. Dickinson scored a lot, but he was 8 of 19 and Eli Brooks was 3 of 11 and had eight points.

“Some of them were good shots," Howard said.

Michigan State: Brown, who averages a team-high 13 points, didn't score until midway through the second half and that didn't hurt the Spartans because their reserves outscored Michigan's 33-6. Brown finished with nine points.

Michigan started the season ranked No. 6, openly talking about national title aspirations. Now, the Wolverines have to close the regular season strong to simply earn a spot in the NCAA Tournament.

“Every game from here on out is a must-win for us," Dickinson said.

The first scheduled matchup on Jan. 8 at Michigan was called off because the Wolverines had a COVID-19 outbreak. Three weeks later, the postponed game still isn't on the calendar.

“Everything I hear it’s going to be in March," Izzo said.

“We are gong to play whoever, wherever, whenever," Howard said.

Michigan State may stay at No. 10 in the AP Top 25 after beating Michigan by 16 and losing at No. 24 Illinois by one point earlier in the week.

Michigan State moved into a first-place tie in the Big Ten with No. 11 Wisconsin and Illinois, but the Fighting Illini won later in the day to be alone atop the conference.

FANS IN THE STANDS

Michigan State's arena was packed and as loud as ever, giving the Spartans a boost and Michigan another problem.

“I think it kind of messed with them a little bit," Michigan State forward Marcus Bingham said.

Even Howard was a fan of the experience.

“I love atmospheres like this as a player, and a coach," he said.

Fans chanted “Joe-y! Joe-y!” after the much-maligned Hauser dove to deflect an entry pass to Dickinson. The hustle led to a jump ball with the Spartans up 74-56 with 3:47 remaining.

“It brought a tear to my eye to hear the crowd chanting Joey Hauser," Izzo said.