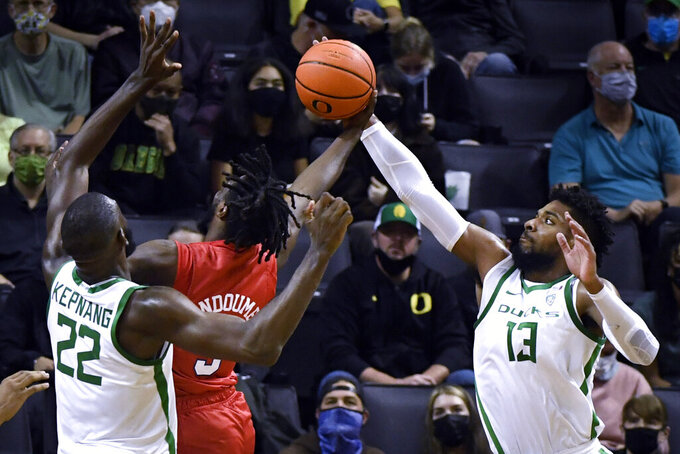 “I think that’s the advantage of having experienced guards getting everyone in the right spot,” Oregon coach Dana Altman said. “Our vets did a really nice job and their energy level was good. We started the game and popped them pretty good early.”

Junior college transfer Rivaldo Soares had 10 points and a team-high seven rebounds — Oregon had a 39-27 advantage on the boards.

“We have a lot of good guys on this team, nobody is selfish,” Soares said. "Coach has an equal opportunity offense, everyone gets a chance to display their skills. … I am definitely confident in our team right now. We have a lot to work on, nobody is perfect, but it is only Nov. 12 and there is a lot of basketball left so we have a lot of opportunities to get a lot better.”

The Ducks shot 63.3% from the field in the first half to take a 50-35 lead at the break. Oregon scored the first eight points of the second half to pull ahead 58-35.

SMU: The Mustangs won their first six games in each of the past two seasons, marking only the second time they accomplished that feat in consecutive seasons in school history. They won’t reach that mark for a third straight season. … SMU is 7-12 against Top 25 teams under coach Tim Jankovich.

OREGON: The Ducks have not trailed in either of their first two games. … Oregon signed two five-star recruits, point guard Dior Johnson and center Kel’el Ware, in the early signing period along with junior college transfer Tyrone Williams.