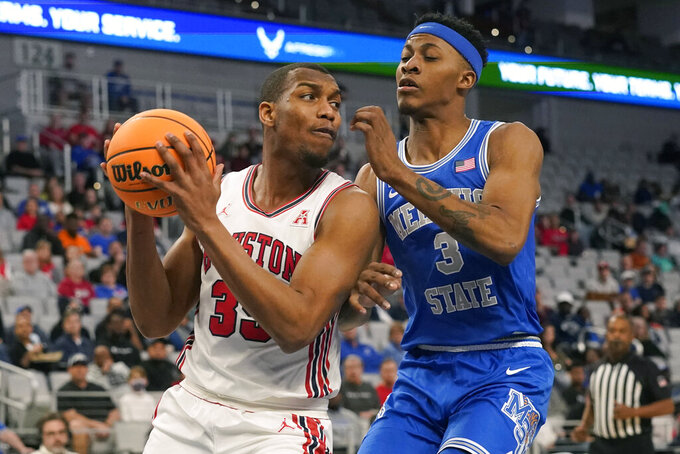 FORT WORTH, Texas (AP) — Fabian White Jr. and No. 18 Houston were a lock for the NCAA Tournament long before they clinched an automatic berth.

Memphis didn’t have to wait long to find out it was going to the school’s first NCAA tourney since 2014, even after losing 71-53 to the Cougars in the American Athletic Conference Tournament championship game Sunday.

It's the first NCAA appearance for the Tigers in Penny Hardaway's four seasons as coach.

“It's tough to be excited after a loss, especially a game we felt like we could have won,” Hardaway said, calling the feeling bittersweet. “I'm going to celebrate being in the NCAA Tournament. That was the ultimate goal.”

Memphis (21-10) was among the first teams revealed during the NCAA selection show, which began about a half-hour after AAC title game. It was so quick that the Tigers missed the live announcement after first going to the locker room before heading to a room upstairs set up to watch the show.

A day after being limited to less than three minutes in the semifinals because of back tightness, White scored 20 points. Fellow first-team All-AAC big man Josh Carlton had 18 for the Cougars (29-5).

Houston had a confetti-filled celebration on the court to mark the tournament title, then went and watched the selection show. After seeing their No. 5 seed in the South Region, matching up with UAB, the Cougars came back out to cut down the nets.

Memphis, which has won 12 of its last 14 games and beat Houston by double figures in both regular-season matchups, is the No. 9 seed in the West Region and will play Boise State.

“We had a pretty good run over the last couple of months,” Hardaway said. “That's over with. ... We're still alive."

“Just really proud of our team, we’ve had a tough year in some ways,” coach Kelvin Sampson said. “To be able to win the regular season and then win the conference tournament, our kids said it in the locker room, they didn’t want to leave any doubt they were the best team in the conference.”

Memphis center Jalen Duren, a 6-foot-11 freshman who was a first-team All-AAC pick, had 14 points and 10 rebounds. DeAndre Williams had 10 points.

Duren was limited to 17 minutes in the Tigers' semifinal game, when he got two early fouls, then missed 6 1/2 minutes in the second half after falling hard to the floor after blocking a shot.

The Tigers, after trailing by as many as 15 points in the second half, closed to 51-47 on Duren's emphatic two-handed dunk with 6:55 left. They never got closer.

Carlton had a three-point play on a slam dunk while being fouled after a nice pass from Moore. Shead then had a hustle play to force a turnover when Memphis had a breakaway chance, and White hit two free throws after a hard tumble when the upper half of his body ended up under the scoring table.

Memphis: After missing the NCAA tourney last year, when they lost to Houston 76-74 in the AAC tournament semifinals, the Tigers went on to win the NIT championship. ... Memphis has won at least 20 games in all four seasons under Hardaway, who played in NCAA Tournaments in 1992 and 1993 in his only seasons playing for the Tigers before an NBA career than ended in 2008. ... The Tigers’ only other loss the past 14 games was to 23-win SMU, which they beat in the AAC Tournament semifinals.

Houston: The Cougars already have one more win than last season, when they won their first AAC tournament championship and then went to their first NCAA Final Four since 1984.

Memphis guard Alex Lomax was called for a flagrant foul after hard contact sent Shead sprawling to the floor with 2:10 left when he was driving toward the basket after a steal by Edwards. Shead jumped up and held up his hand to let his teammates know he was OK, and to ease tensions. Carlton and other teammates hugged Shead as they fired up their fans behind the bench. After referees reviewed the play, Lomax hugged Shead and went to the sideline to shake the hand of Sampson.