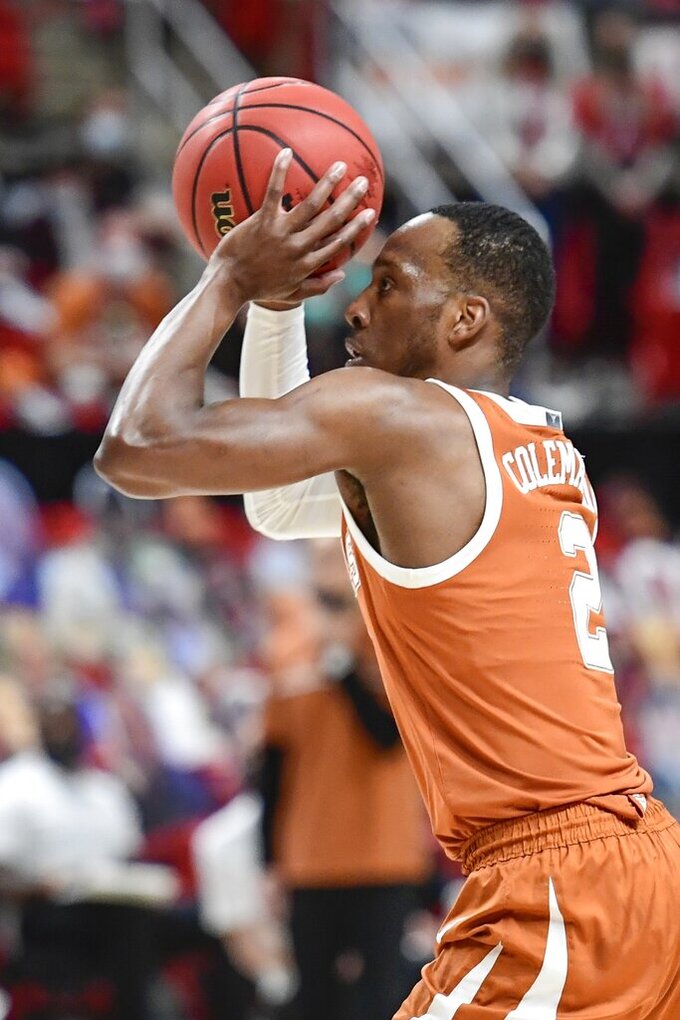 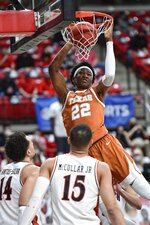 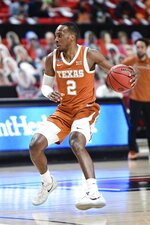 LUBBOCK, Texas (AP) — Mac McClung had 16 points to lead five Texas Tech players in double figures and the No. 18 Red Raiders snapped a three-game losing streak with a 68-59 victory over No. 14 Texas on Saturday.

The game was tied at halftime, but Texas Tech (15-8, 7-7 Big 12) went ahead to stay when six different players scored in a 19-6 run to open the second half. That spurt came over a nearly nine-minute span when the Longhorns got all of their points on free throws while missing 11 shots in a row.

Texas Tech had its largest lead at 52-39 on a jumper by Marcus Santos-Silva with 11:29 left in the game. The Longhorns (14-7, 8-6) finally got that first field goal of the second half when Brock Cunningham made a 3-pointer.

Terrence Shannon Jr. had 11 points for the Red Raiders, while Santos-Silva, Kyler Edwards and Kevin McCullar each had 10. Santos-Silva had nine rebounds.

Jericho Sims had 11 points to lead Texas, which played the first of four consecutive road games to end the regular season. That includes three makeup games next week. Matt Coleman III had 10 points.

McClung had only five points before halftime, when he made consecutive baskets after steals by McCullar as the Red Raiders scored eight points in just over a minute to take their first lead.

The Longhorns had their largest lead at 24-17 on a dunk by Andrew Jones with 6:09 left in the first half before Edwards hit a 3-pointer for Tech.

Consecutive steals by McCullar led to a fastbreak layup by McClung, followed by a 3 that made it 25-24. McCullar made a jumper with 19 seconds left, but Texas tied the game 33-all on after Coleman's long 3 from the right wing in front of the Texas Tech bench to end the first half

Texas: The Longhorns have had some wild swings in their last three games. They blew a 19-point lead in the second half at home last Saturday in an 84-82 loss to No. 10 West Virginia, then Tuesday had their biggest comeback of the season — from 14 points down to beat No. 17 Kansas and complete their first regular season series sweep of the Jayhawks. Texas could overcome a 13-point deficit in Lubbock, but did get within 59-56 after a dunk by Sims, then a steal by Courtney Ramey that led to a 3-pointer by Jones.

Texas Tech: The Red Raiders head into March and their three makeup games — at home against TCU and Iowa State before going to No. 2 Baylor — finally back at .500 in Big 12 play. They completed a regular-season sweep of the Longhorns, including their win in Austin on Jan. 13 when McClung hit a long-range jumper with 3 seconds left for a 79-77 win. Tech has won seven of its last eight against the Longhorns.

The Longhorns and Red Raiders could be ranked closer to each other, with Texas likely to drop a spot or two and Texas Tech maybe moving up a spot or two.

Texas Tech is home against TCU on Tuesday night.