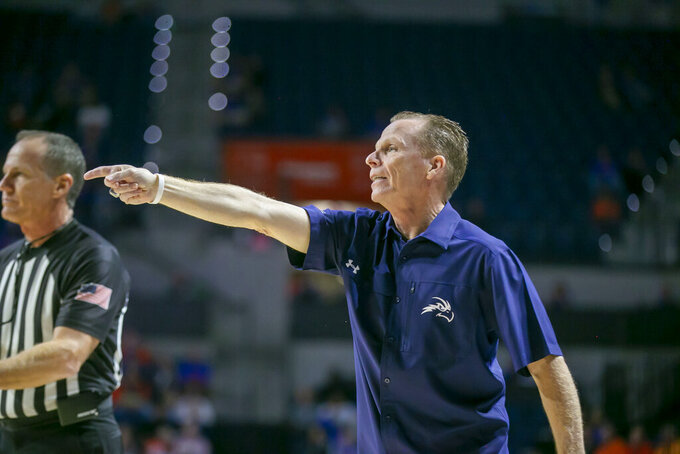 North Florida head coach Matthew Driscoll shouts at his team during the first half of an NCAA college basketball game against Florida Wednesday, Dec. 8, 2021, in Gainesville, Fla. (AP Photo/Alan Youngblood) 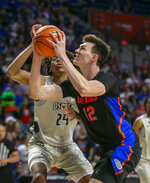 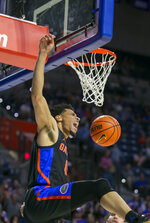 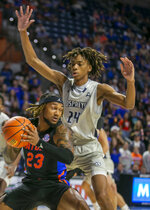 He surely will get a better night's rest now.

Castleton had a career-high 26 points to go along with eight rebounds, Myreon Jones added 14 points and No. 20 Florida ended a two-game skid with a 85-55 victory against North Florida on Wednesday night.

Coming off a stunning home loss to previously winless Texas Southern on Monday, the Gators (7-2) dominated from the opening tip and improved to 27-0 all time against the Ospreys (2-9).

Castleton was a key contributor in the latest one. He was 9-of-17 shooting and made 8 of 11 from the free-throw line. He chipped in two assists, two steals and a blocked shot.

“Colin was really good," coach Mike White said. "He was aggressive. He imposed his will on the interior. It started with the way he approached his defensive effort.”

It really started two night earlier with one of the biggest upsets in school history. The Gators held a lengthy team meeting Tuesday in which players spoke, took ownership and even offered constructive criticism to one another.

“Just beating ourselves up,” said Castleton, who admittedly took the loss personally. "We just didn’t do what we’re supposed to. But that’s in the past. We got to stop talking about that loss. We got to move on.”

It'll be a lot easier now.

“It helped a lot just to get that bad feeling out of us, just to get back on this winning streak that we started and just to show people like that wasn’t us on Monday," Jones said.

The Gators opened the second half with a 12-0 run that turned an 18-point lead into a laugher. Florida’s press forced turnovers early and often that led to easy baskets and free throws. White’s team ended the night with a season-high 21 steals.

“We were back in character, played to our identity," White said.

It was a much different performance than the Gators showed two nights earlier in the O’Connell Center, where a lackluster effort led to an embarrassing loss against a 23 1/2-point underdog that could drop them from the rankings. White thought there was some carryover from losing at Oklahoma last week.

North Florida: The Ospreys fell to 0-31 against ranked teams in their 17-year history of playing Division I basketball. They are 0-3 this season, having previously lost to then-No. 2 UCLA and then-No. 10 Kentucky. But the payday games are critical to helping the private school in Jacksonville fund its athletic department.

Florida: White rebuilt his roster with five transfers and two freshmen and expected some growing pains. Back-to-back losses to Oklahoma and Texas Southern could prove beneficial in the long run as they Gators learn how to win and how to handle losing.

Florida big man Jason Jitoboh, who sat out Monday’s loss because of a coach’s decision, returned to the rotation and had three points, a rebound and a block before fouling out in seven minutes of action. He got two rousing ovations: one for a dunk midway through the second half and another when he grabbed a cheerleader’s megaphone and used it to knock down a ball wedged between the rim and the backboard.

Florida: Finishes the week against Maryland on Sunday in the Barclays Center in Brooklyn, New York.