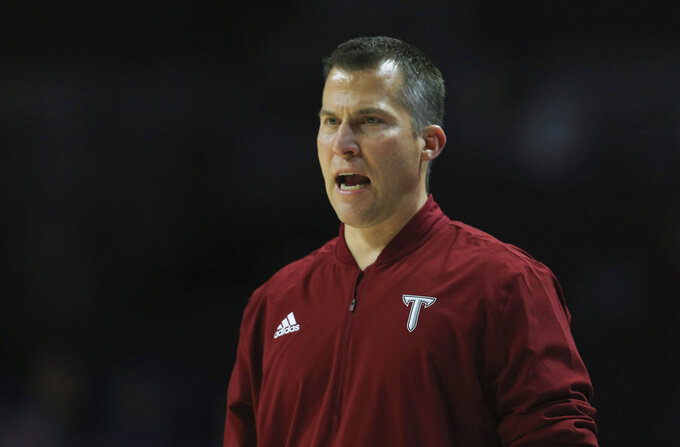 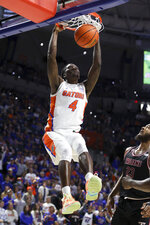 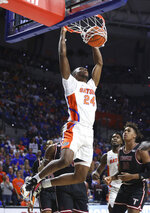 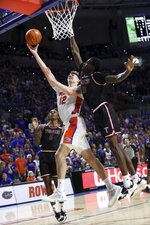 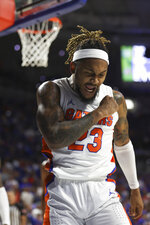 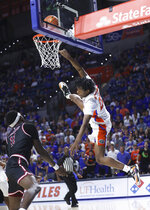 GAINESVILLE, Fla. (AP) — Florida is off to its best start in coach Mike White's seven seasons.

Myreon Jones and Tyree Appleby scored 12 points apiece, and the 23rd-ranked Gators remained unbeaten with a 84-45 victory over Troy on Sunday.

Florida (6-0) scored the first 13 points of the game and never relinquished its double-digit lead. Kowacie Reeves connected on a turnaround jumper at the first-half buzzer to give the Gators a 49-20 advantage, their largest of the game.

“I was really pleased with the mental approach and the start that we got off to,” White said. “I anticipated this game being closer.”

Florida leading scorer Colin Castleton finished with a season-low 10 points, eight rebounds and a pair of blocks. White said the Gators anticipated Troy would try to make Castleton a non-factor.

“We did a pretty good job playing through Colin in different spots on the post, and they were pretty aggressive with bringing a double (team),” White said. “We had some possessions we didn’t execute as well as we could have, and then we had two or three where we handled the double pretty well and got good looks out of it, so we’re still a work in progress with teams sending a guy or two at Colin.”

Troy (4-3), which came into the game ranked 11th in the nation in steals, managed eight against Florida. Duke Deen, who entered averaging 13.3 points, led the Trojans with 10 points on 2-of-8 shooting.

Troy committed a season-high-tying 21 turnovers. The Gators finished the game with 32 points off turnovers, connected on 17 of 19 free-throw attempts and out-rebounded the Trojans 40-37.

Florida’s Phlandrous Fleming made his first start of the season in place of Brandon McKissic and scored 11 points. McKissic suffered a hamstring injury in Wednesday’s win over Ohio State and came off the bench Sunday, finishing with 10 points.

“That’s the thing with this team: Anybody could start,” Jones said. “We know even if (Fleming) wasn’t starting, he probably would play starter minutes and be a big factor in the game. So I feel like to start, I mean, it doesn’t really matter. Phlan is an unselfish player on this team, and being ready, I feel like that’s just what he does.”

Elijah Kennedy had with a season-high six points, and Reeves finished with eight points after knocking down a pair of 3-pointers in the waning minutes. With McKissic limited, White was encouraged by the play of the team’s freshmen, saying they didn’t look to force any shots despite the disparity on the scoreboard.

“With the size of the lead, you’re playing subs at the end of the game,” White said. "And I just don’t think there was much shot-hunting.”

Florida ended the week 3-0, including a buzzer-beating victory against Ohio State in the title game of the Fort Myers Tip-off, and likely will rise in the rankings when the next AP Top 25 poll is released Monday.

Troy: Coach Scott Cross will look for his 250th career win on Wednesday.

Florida: White’s decision to rework his roster via the transfer portal is paying early dividends.

Florida: At Oklahoma on Wednesday night.