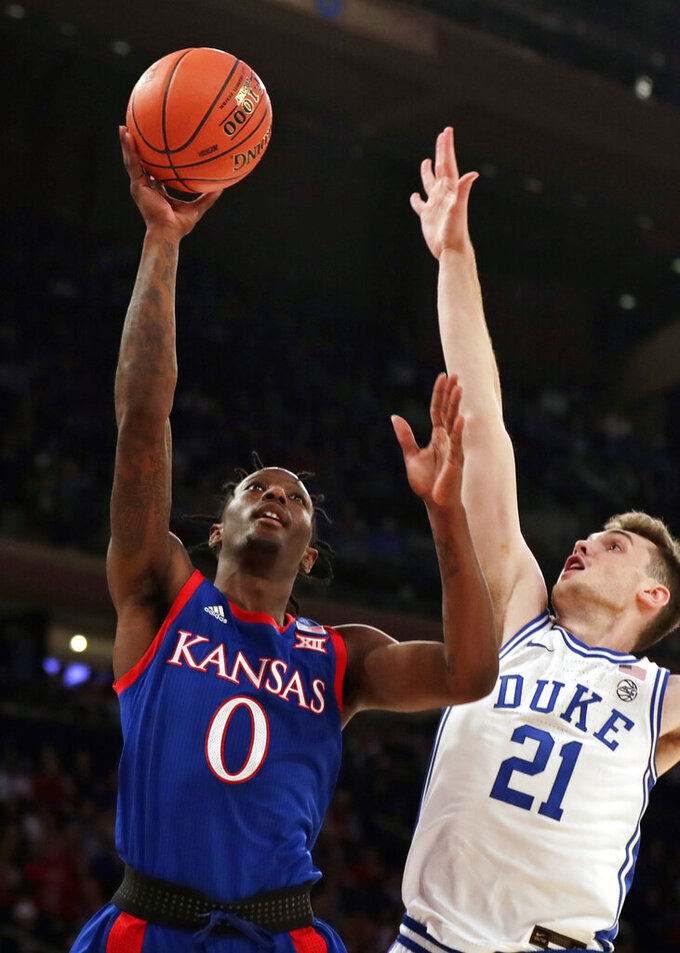 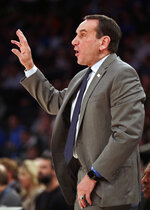 Jones scored 15 points and Cassius Stanley added 11 of his 13 points in the second half to help No. 4 Duke beat third-ranked Kansas 68-66 in the opener of the Champions Classic on Tuesday night at Madison Square Garden.

"The difference maker was Tre. Lot of young guys, lot of new guys," Krzyzewski said. "We really tried to play good defense in our first 30 practices. We played really good defense (tonight). It starts with that kid. Really happy with my team. Terrific win for us."

While Duke doesn't have the star-studded freshmen class of last season of Zion Williamson, Cam Reddish and RJ Barrett, Krzyzewski may have a more balanced team, capable of making plays down the stretch when needed.

"One of the main things I have to learn how to do is sub," the Hall of Fame coach joked. "Last couple years might bring in one guy. All of a sudden there are three guys. Not sure I did a good job, but it worked."

Trailing 61-59 with 2:29 left, Stanley drove to the basket and made the layup and was fouled. The freshman guard converted the free throw to give the Blue Devils a one-point lead.

Devon Dotson missed a layup on the other end and Jones then hit a jumper that bounced off the rim twice before dropping in with 1:33 left.

Marcus Garrett got the Jayhawks back within one. After a miss by the Blue Devils, Kansas turned the ball over with 37 seconds left. It was the Jayhawks' 28th turnover of the game. Jones then converted two free throws with 26.2 seconds left.

Kansas had chances, but couldn't convert until Dotson banked in a meaningless 3-pointer at the buzzer. He finished with 17 points.

"We're disappointed in the outcome. That was a game that either team could have won multiple times. We had ourselves in good position in the second half and the game got away from us," Kansas coach Bill Self said. "It's a learning experience. Not sure a game win or lose on Nov. 5 will count much in March. There's a lot of things we can learn."

Self wasn't happy with the turnovers, but knows that it was the first game of the season.

"Duke's defense is better than the exhibition game. I think we played uncharacteristic," Self said. "I think we made easy plays difficult many times. A lot of that was the nerves, the environment. Guys wanted to do well so bad."

Tuesday's game marked the return of Kansas senior Udoka Azubuike, who played only nine games last year after tearing ligaments in his right hand. He had eight points. It also was the first game for Silvio De Sousa since the 2017-18 season. He was suspended for two seasons because of NCAA violations and sat out last year as Kansas was implicated in the FBI probe of college basketball. Kansas won an appeal that allowed De Sousa to play this year. He got a nice ovation from the fans when he checked in nearly 3:30 into the game. He finished with three points.

Duke led 33-30 at the half as neither team really got into much of an offensive rhythm in the opening 20 minutes. There was a lot of sloppy play with Kansas committing 18 turnovers. Despite all the miscues, the Jayhawks were able to stay in the game by hitting 10 of their 19 shots from the field.

Second-ranked Kentucky knocked off No. 1 Michigan State 69-62 in the second game of the doubleheader. This is the first time in the nine-year history of the event that the four teams occupy the top four spots in the poll.

NIFTY PLAY: Stanley had back-to-back dunks on the break, both coming on assists from Tre Jones. The second one came when Jones threw a 45-foot bounce pass to a streaking Spencer who finished the play with a one-handed jam.

NOT SO FREE THROWS: Both teams struggled from the foul line with Kansas going 16 for 26 and Duke 14 for 23.

MSG MILESTONES: Krzyzewski has had many memorable moments at Madison Square Garden, including passing Bobby Knight with his 903rd career win in 2011 to become No. 1 on the all-time men's victory list. He also had his 1,000th career win at MSG in 2015.

"This is the one I love playing in after Cameron. Balls bounce different, the noise. Something about this place," Krzyzewski said. "I've now coached over 50 games in here. ... When eventually I stop coaching, I'll look back at the times here as very special times in New York."