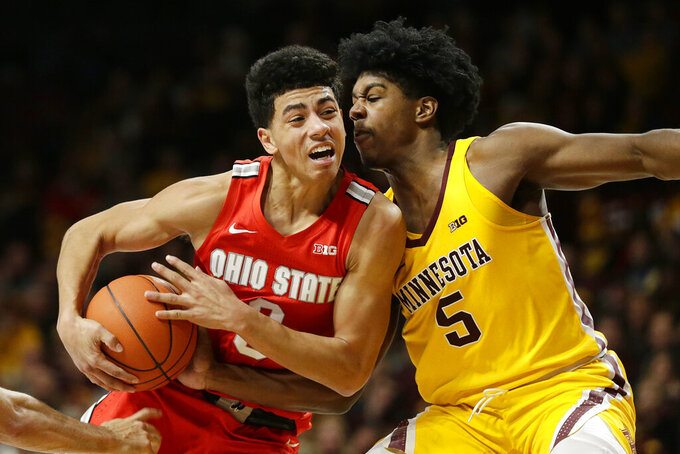 INDIANAPOLIS (AP) — Ohio State is No. 1 in the NCAA's initial NET rankings for the second straight season.

The Buckeyes (9-1) were ranked No. 5 in The Associated Press poll released Monday but topped the NET rankings based on the nation's best adjusted efficiency margin and a top-50 strength of schedule.

Kansas, No. 1 the AP Top 25, was second in the NET, followed by San Diego State, Butler and Baylor. Gonzaga, Auburn, Louisville, Stanford and Dayton round out the top 10.

Last season, the NCAA ditched the RPI for its own ranking system, the NCAA Evaluation Tool, to select teams for the NCAA Tournament. The NET relies on game results, strength of schedule, game location, scoring margin, net offensive and defensive efficiency, and quality of wins and losses.

Ohio State has wins over North Carolina, Villanova and Cincinnati, with its only loss coming Sunday at Minnesota.

San Diego State (10-0) and Auburn (9-0) join Duquesne and Liberty as the only undefeated teams left in Division I.

Virginia and Texas Tech, last year's national finalists, debuted at No. 2 and No. 3 in the NET rankings a year ago.