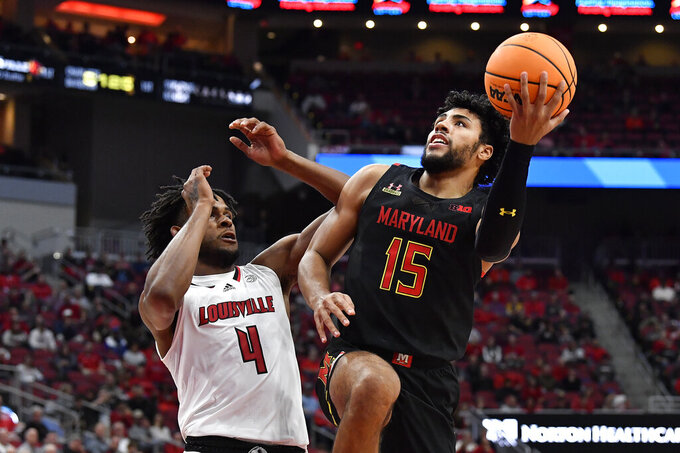 Maryland forward Patrick Emilien (15) goes up for a shot past Louisville forward Roosevelt Wheeler (4) during the first half of an NCAA college basketball game in Louisville, Ky., Tuesday, Nov. 29, 2022. (AP Photo/Timothy D. Easley)

LOUISVILLE, Ky. (AP) — Donta Scott scored 18 points and No. 22 Maryland made five consecutive 3-pointers to open the second half in a runaway 79-54 victory over winless Louisville on Tuesday night in the ACC/Big Ten Challenge.

The Terrapins (7-0) led throughout, including 37-26 at halftime, before Don Carey sank the first of two from long range during the 15-6 surge that featured two 3s from Scott and one from Hakim Hart. They went ahead 60-37 with 11:32 remaining and led by as many as 33 in their first true road game of the season.

“I got on ’em a little bit at halftime,” first-year Maryland coach Kevin Willard said. “They came out with good intensity and started making shots. I think some of these guys need a little time to settle into the game.”

Maryland ended up shooting 54% after halftime and 50% overall while posting its seventh consecutive double-digit win under Willard, who was hired after 12 seasons at Seton Hall. The Terps shot 6 of 11 from long range in the second half and 9 of 24 overall.

El Ellis scored 15 points for the Cardinals (0-7), whose nightmarish start continued as they shot 34% against their third ranked opponent in four games. Louisville began the season with one-point losses at home to Bellarmine, Wright State and Appalachian State but has been blown out four straight times since its schedule got tougher.

After reminding his team how important it was to start the second half strong, Cardinals rookie coach Kenny Payne saw the game slip away.

“And they went and made three straight 3s, four straight 3s,” Payne said. "A lot of credit goes to them. We did not compete, we did not fight. We didn’t meet their intensity at times. It’s like we gave up. I just asked the guys, ‘Is that the case?’”

The coach later acknowledged players' commitment and added, “We’re going to keep plugging away. We’re not giving up.”

Brandon Huntley-Hatfield had eight points and eight rebounds for Louisville.

Scott, whose 15.5 points per game led four Maryland players averaging double figures, made 3 of 6 from behind the arc and 7 of 12 overall. Jahmir Young added 15 points with one 3 and Ian Martinez scored 10 off the bench, including two 3s.

“Every last one of our guys I believe in to make those shots and we believe in each other as a whole, and that’s how we did it,” Scott said. “Our coach gives us freedom on the offensive end, so at that point we just had to go out there and knock down shots and make those buckets that we’ve been doing our whole lives.”

Maryland outrebounded Louisville 38-33 and outscored the Cardinals 36-24 in the paint. Julian Reese had seven rebounds, while Scott and Young had five each.

The schools faced each other for the second consecutive season, one year and a day after Louisville topped Maryland 63-55 for the Baha Mar Hoops championship in the Bahamas.

Louisville: After a disastrous showing at the Maui Invitational, the Cardinals simply wanted to make small steps forward in their rebuild. They couldn't match Maryland’s quickness, athleticism and accuracy. The Cardinals' 13 turnovers were below their average of 17.5, but still led to 21 points.