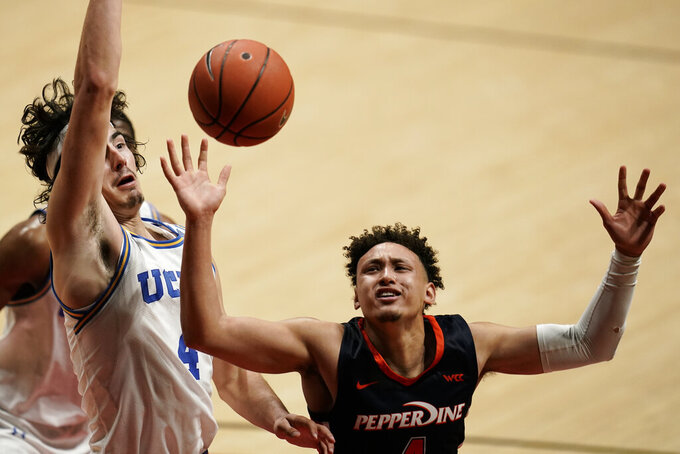 SAN DIEGO (AP) — The UCLA Bruins have two days before their home opener to try to get their legs back under them after a physically taxing three-overtime thriller against Pepperdine.

Tyger Campbell and Jules Bernard hit 3-pointers early in the third overtime, and Chris Smith added a three-point play to finish with 26 points and lead No. 22 UCLA to a 107-98 victory Friday.

“There’s a lot of film that we’re going to show tomorrow as we take ice baths,” second-year coach Mick Cronin said. “I’m going to put my head in a bucket of ice and I’m going to have Tyger and those guys take cold tubs, Jaime and Chris, who played 50 minutes."

Jaquez, a sophomore swingman who had a heads-up play to keep the Bruins alive in the second OT, was thinking the same thing.

"I know when I go back I’m probably going to take a nap, get a good night’s sleep, get in an ice bath and do whatever I’ve got to do to prepare for the next game we’ve got,” he said.

Senior guard Colbey Ross also played all 55 minutes and had 33 points to become Pepperdine’s all-time leading scorer but it wasn’t enough to keep the Waves (1-1) from losing their sixth straight to UCLA and their 38th straight to a ranked opponent. Ross hit a floater to send the game into a second overtime tied at 81 but missed a 3-pointer that forced a third OT.

Campbell and the Bruins (1-1) came out strong in the third extra period to avoid a second straight upset loss to open the season. Campbell hit a 3-pointer off the tip and Bernard scored from behind the arc to counter a layup by Ross and give UCLA a 95-91 lead.

Smith, who also had 12 rebounds, scored inside with 3:15 left, was fouled and converted for a 98-93 advantage.

“Three overtimes is definitely draining,” Smith said. “The couple times I went out, one time was because of foul trouble and the other time coach told me as soon as I came out, to tell him when I was ready. Fifty minutes was what it took to get a win tonight, so if I have to play 50 minutes every single night, I'm going to do it as long as we come out with the win.”

UCLA was routed 73-58 by San Diego State on Wednesday night in the four-team event at Viejas Arena.

Bernard and Riley fouled out for the Bruins, while the Waves lost Edwards, Smith and Chukwuka.

“They’re hard to defend,” Cronin said. “Our first three halves this year, our defense wasn’t up to par and that’s on me. But we did what we had to do adjustment-wise at halftime and the guys stepped up their effort and energy.”

UCLA held Pepperdine to 30% shooting in the second half but couldn't close out the Waves in the first 40 minutes.

“We just didn’t finish the game,” Cronin said. “We were playing small and we couldn't get a rebound and they hit two 3s off second shots.”

Both teams had chances to win it in regulation after UCLA blew a six-point lead.

With the score tied at 70, Jaquez missed a 3-pointer with 3.7 seconds left. After a review, the officials had the clock reset to 7.3 seconds. Pepperdine’s Darryl Polk Jr. turned the ball over under pressure from Riley, and UCLA then threw the ball out of bounds. Pepperdine’s Smith missed a tip-in at the buzzer.

Zidek, whose father, George, was on UCLA’s 1995 national championship team, made a jump hook with 1:06 left in the second overtime to give Pepperdine an 89-88 lead. Jaquez missed two free throws with 8.3 seconds left but rebounded his second miss, was fouled again and made the first of two free throws to tie it at 89.

Ross missed a 3-pointer at the buzzer to bring on a third OT.

Ross became Pepperdine’s all-time leading scorer when he sank the second of three free throws with 15 seconds left in the first half to give him 1,787 points and move past Stacy Davis. Ross set the mark in 25 fewer games than Davis. It was the 100th consecutive start for Ross, who has 1,809 career points.

“You have to credit UCLA for making the plays at the end when we didn’t,” Pepperdine coach Lorenzo Romar said. "It’s too bad that we weren’t able to pull it out for a number of reasons, but it would have been good to enjoy a win like that while also celebrating Colbey Ross becoming the program’s all-time leading scorer.”

Those three free throws, which came when he was fouled by Jaquez while taking a 3-pointer, helped the Waves to 39-32 halftime lead. Ross had 12 points in the first half.

Pepperdine: The Waves haven’t beaten a ranked opponent in exactly 16 years, at home against No. 20 Wisconsin. Their last victory against a ranked foe away from home was Nov. 28, 2001, at No. 10 UCLA, which was the last time the Waves beat the Bruins. The 38 straight losses to ranked teams include 23 to Gonzaga in West Coast Conference play.