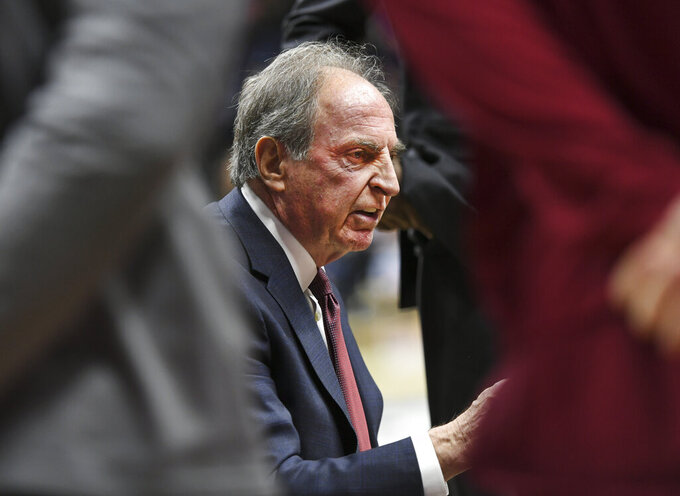 Temple head coach Fran Dunphy talks to his team during a timeout in the second half of an NCAA college basketball game against Connecticut, Thursday, March 7, 2019, in Storrs, Conn. (AP Photo/Stephen Dunn)

DAYTON, Ohio (AP) — Fran Dunphy stood courtside with arms crossed, clutching a sheet of notes in his left hand, as the Temple Owls made layups to start practice. The school fight song played over the public address system at the University of Dayton, a place where the 70-year-old coach has known heartache and exhilaration over the years.

This visit is special. For Dunphy, it's a one-and-done First Four.

The Owls coach is retiring after the season, though he's loath to consider what it'll be like without the recruiting and the games and the tournament pressure. Whenever Temple (23-9) is finally finished, Dunphy will hand the program over to Aaron McKie, a former Owls star who is now an assistant coach.

Dunphy coached 17 years at Penn before replacing John Chaney at Temple in 2006. The pass-the-torch moment could come on Tuesday night against Belmont (26-5), or it could come deeper in the NCAA Tournament. With all the uncertainty, there's no time to feel nostalgic.

"To be honest with you, I think the nostalgia will hit me sometime in mid-April when I was going to go on a recruiting mission and I don't — things like that," Dunphy said. "But I think at this point you're so busy and so caught up in what is happening in the moment.

"So you don't have much time or desire to think about yourself in this situation."

The bigger concern is trying to figure out how to slow a Belmont team that averages 87.4 points per game and gives up 73.9. The Bruins got an at-large bid after losing the Ohio Valley Conference title game to Murray State. They present an unusual matchup on short notice.

"We're in a cram session," Dunphy said. "I was never a good student, so I didn't do a lot of cramming back in the day. That's what we're doing now. You don't sleep too much and you're fired up."

Someday, he'll miss that part, too.

Some things to watch as the tournament gets started in Dayton:

GRADING ON A CURVE

Fairleigh Dickinson coach Greg Herenda realized that some Dayton students were participating in the media interviews Monday and complimented them on their appearance and their energy. Herenda compared himself to an adjunct professor and gave them all an "A'' for their presentation.

"I'm a 58-year-old man, and I was your age, and I'm just telling you: Man, if you've got a dream you just follow it," he said. "And it's not about talent, it's about heart. It's about desire. And it's about perseverance."

Fairleigh Dickinson (20-13) faces Prairie View A&M (22-12) in the First Four opener Tuesday night. Eleven months ago, Herenda was heeding his own advice about perseverance. He was in intensive care for eight days with blood clots in his thigh and abdomen.

"It's not me," he said. "It's the people at the hospital, my family and my team that brought me back to this point. ... Quite honestly, they were an inspiration for me."

UCLA and Arizona State lost at the First Four last year, leaving the Pac-12 with only one team in the main draw: Arizona, which lost to Buffalo in the first round. Just like that, it was Pac-It-In time for the league. Arizona State (22-10) is back in Dayton, set to play St. John's (21-12) on Wednesday night in the final game of the First Four. Pac-12 regular season champ Washington plays Utah State in Columbus on Friday, and tournament champion Oregon faces Wisconsin in San Jose on Friday.