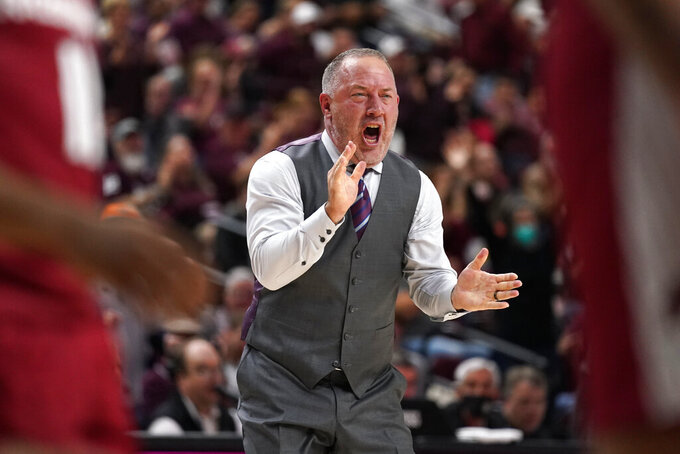 Texas A&M head coach Buzz Williams reacts after his team made a 3-point basket against Arkansas during the second half of an NCAA college basketball game Saturday, Jan. 8, 2022, in College Station, Texas. (AP Photo/Sam Craft) 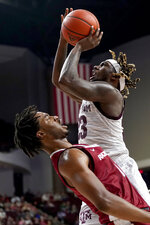 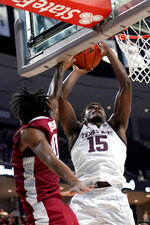 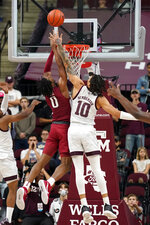 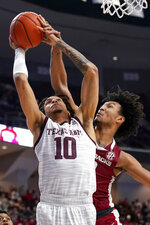 The Williams free throws came after teammate Hassan Diarra, a 55.6% free throw shooter, made a pair for an 84-80 lead with 14 seconds left and Davonte Davis intentionally missed a free throw with 5.7 seconds remaining for Arkansas.

Davis made his first free throw and as he intentionally missed the second, he was called for a lane violation. The Aggies had to use a timeout to get the ball in and Williams got behind the defense and then sealed the game after gathering in the long pass.

Jackson answered with a 3-pointer at 34 seconds but Notae followed with a pair from the line. The Razorbacks trapped Diarra far from the basket but fouled him.

Henry Coleman III scored 14 points for the Aggies (13-2, 2-0 Southeastern Conference), who won their sixth straight, the last being a two-point conference win at Georgia. Andre Gordon added 13 points, Tyrece Radford 12 and Wade Taylor IV 11. Williams, who hit the game-winning 3 against Georgia with 1.2 seconds to play to give A&M its best start since 2015-16, finished with nine points.

Notae scored 31 points for the Razorbacks (10-5, 0-3), who have lost five of six. It was an Arkansas best and the fourth 30-plus game of his career that started with Jacksonville. Davis scored 13 off the bench, going 9 of 10 from the line.

Ole Miss visits Texas A&M and Missouri is at Arkansas on Wednesday.