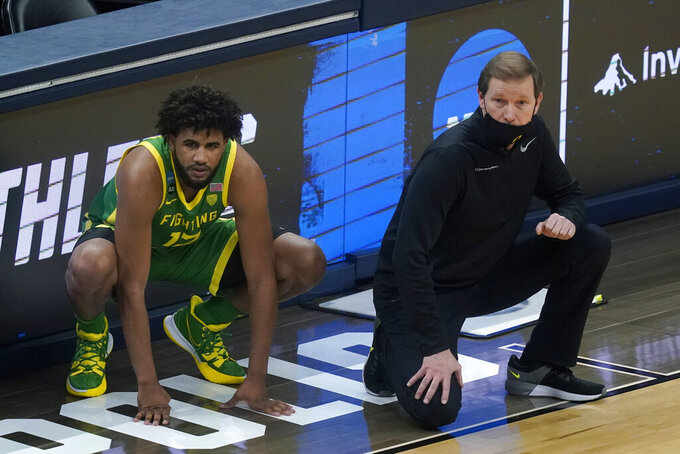 A once-elite program had fallen into into mediocrity, losing seasons mixed in with short-lived trips into the NCAA Tournament.

A two-week run of playing their best at just the right time has the Trojans turning the corner — possibly toward the Final Four.

Isaiah White scored 22 points and USC shut down Oregon's potent offense to reach the Elite Eight for the first time in 20 years with an 82-68 win in the West Region semifinals Sunday night.

“We’re making history and it just means a lot to this program,” White said. “As a team, we’re just super excited and we worked for this, so I’m glad that it’s paying off.”

Pac-12 After Dark Indy-style turned into a lights-out performance by USC.

The Trojans (25-7) clipped the high-flying Ducks with their length on the perimeter and 7-footer Evan Mobley in the middle. Offensively, the region's No. 6 seed bobbed and weaved through the holes in Oregon's defense, shooting 57% and 10 of 17 from 3.

The all-around domination put USC in the Elite Eight for the second time in 60 years and three Pac-12 teams in the regional final for the first time since 2001.

Next up is a shot at undefeated Gonzaga in the regional final Tuesday.

“We believe we can beat anybody," White said.

Oregon certainly had no answer for the long-armed Trojans.

The seventh-seed Ducks (21-7) floundered after USC switched to zone early on, unable to find holes or get much of anything to drop over it until a late rally that came up short. The Pac-12's best 3-point shooting team (38%) went 5 of 21 from the arc.

Eugene Omoruyi had 28 points 10 rebounds, and Chris Duarte scored 21 for the Ducks.

“I let the guys down. I didn’t have them ready for that zone,” Oregon coach Dana Altman said. “I thought we were, but their length and athleticism really bothered us.”

Oregon and USC have been a big part of the Pac-12's unexpected success in the Circle City.

Picked to be the worst among the major conferences, the big league out West opened the NCAA Tournament with nine straight wins and got four teams through to the Sweet 16.

Oregon State and UCLA already advanced, so the showdown between the Ducks and Trojans meant a Pac-12 trio in the Elite Eight.

Oregon was in a familiar position, running this deep into March for the fourth time in five NCAA Tournaments. USC had to reach back to the 2006-07 team with Nick Young and Taj Gibson for its last Sweet 16 ride.

The Trojans won the teams' lone regular-season meeting 72-58 by getting off to a fast start.

They did the same in the rematch by slowing the fast-moving Ducks.

Normally free flowing on offense, Oregon had a hard time solving USC’s zone between the big guards up top and the shot-swatting Mobley anchoring the paint.

Offensively, USC looked more like the Ducks than they did, pouring in 3s and getting shots at the rim, using a 17-2 run to go up 14. The Trojans led 41-26 at halftime.

Oregon turned it over, failed on a lob attempt and then Mobley threw down a two-handed dunk over Franck Kepnang.

“When you’re trying to come back from the deficit that we had you just can’t have those mistakes," Altman said.

Omoruyi played just one season at Oregon after transferring from Rutgers, but it was a special one.

The 6-foot-6 forward from Ontario was the Ducks' do-everything player during the season, scoring, rebounding and getting his nose dirty on defense.

When he checked out of Sunday's game in the final minute, the emotions came pouring out. He shared a hug with Altman walking off the floor and with other team members behind the bench.

“I’m going to miss this group,” he said. “This is definitely my favorite group to play with. We’re just a family on and off the court. It’s a heartbreaking moment right now.”

Mobley was USC's fourth-leading scorer with 10 points on 4-of-6 shooting.

His impact went far beyond his point total.

“He takes what the defense gives, he has confidence in his teammates,” USC coach Andy Enfield said. “When your most talented offensive player is your most unselfish and most willing passer, you can win a lot of games like that.”