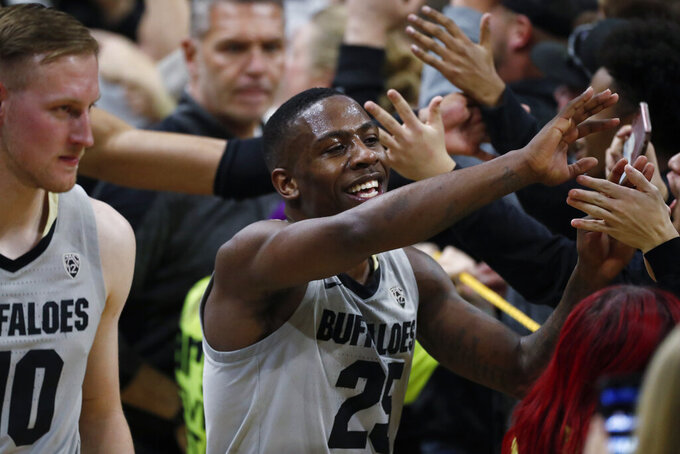 Colorado guard McKinley Wright IV is congratulated by fans as they storm the court after the second half of an NCAA college basketball game against Oregon Thursday, Jan. 2, 2020, in Boulder, Colo. Colorado won 74-65. (AP Photo/David Zalubowski)

BOULDER, Colo. (AP) — McKinley Wright IV received a little pep talk from none other than himself.

“I told myself I had to get going,” he said of his second-half inner monologue.

The junior guard scored 11 of his 21 points in the final five minutes and Colorado beat another ranked team, taking down No. 4 Oregon 74-65 on Thursday night.

“I love moments like that," said Wright, who also had eight assists. "I like having the ball in my hands to make plays for myself and my teammates.”

“It's just one of those things they have a good team,” said Altman, whose team was 3 of 18 from 3-point range. “One of the best home courts. It's a tough place to play.”

“This is a special team,” Boyle said. “We have great kids in that locker room. It's a special group.”

This was a matchup between the teams picked to finish first (Oregon) and second (Colorado) in the Pac-12 preseason media poll. Round 1 went to Colorado, which despite being unranked was a 1 1/2-point favorite.

In the mind of Wright, a message was sent.

“We thought we were the best team in the conference,” he said. “We wanted to showcase that tonight.”

They did. All part of the process.

“Respect cannot be learned, purchased or acquired. It can only be earned,” said Boyle, whose team has that mantra posted in their film room. “We have to earn that respect.”

Colorado built a 15-point lead early in the second half on an alley-oop, fast-break dunk by Bey. But Oregon began to steadily chip away.

Bey had a big block of Anthony Mathis with 4:34 remaining, but was given a technical foul for taunting. Mathis made both free throws to make it 57-53. Wright hit a 3-pointer to restore some breathing room.

“Got the crowd back into it. We needed that,” Boyle said. “Big players make big plays.”

The noise was at a frenzied level despite the students being on winter break, and the fans ran onto the court after the final buzzer.

“That was a high-level college basketball game,” Boyle said. “It was as good as advertised.”

The Ducks had their five-game winning streak halted on a night when they struggled at times to run their offense.

“Just one of those nights,” Altman said.

Oregon: Boulder, Colorado, continues to haunt the Ducks, who were out-rebounded 36-34.

Colorado: Defense has been the Buffs' calling card all season. They fed off of it all evening as they led for over 30 minutes.

D'Shawn Schwartz finished with 13 points. ... Former Colorado football standout and current Denver Broncos tailback Phillip Lindsay was in attendance and given a round of applause when he was introduced. ... The attendance was 10,770.

Boyle wasn't pleased with Bey picking up a technical for taunting.

“There's no room for that," Boyle said. “Unacceptable.”

Oregon entered the game averaging nearly nine made 3-pointers a game. The Ducks didn't make their first 3-pointer until the second half.

“We had some good looks and didn’t knock them down early,” Altman said.

Oregon's appearance at No. 4 matches its highest ranking in the AP poll, although the Ducks are likely to drop next week. The team also was No. 4 in the Nov. 14, 2016, version of the poll. That team went on to reach the Final Four.

Oregon: At Utah on Saturday.