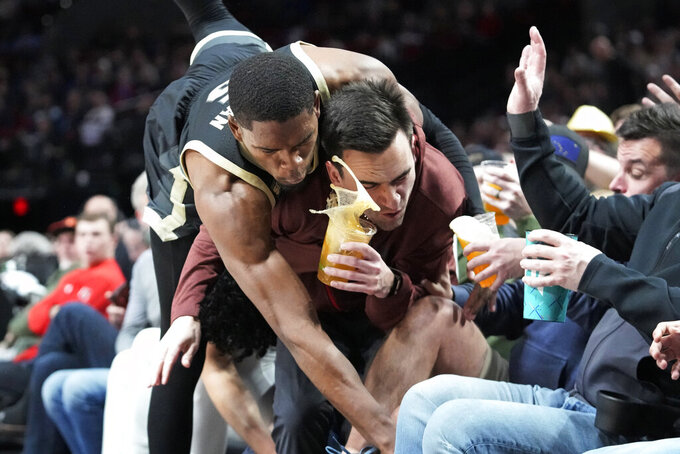 Purdue guard Brandon Newman (5) falls into the seating area during the first half of the team's NCAA college basketball game against Gonzaga in the Phil Knight Legacy tournament Friday, Nov. 25, 2022, in Portland, Ore. (AP Photo/Rick Bowmer)

PORTLAND, Ore. (AP) — Zach Edey and his Purdue teammates were admittedly too excited early on for the chance to compared themselves to one of the top teams in the country.

Once the 24th-ranked Boilermakers calmed down, they showed they are worthy of their own consideration as a top team after a thorough 84-66 thumping of No. 6 Gonzaga in the semifinals of the Phil Knight Legacy tournament on Friday night.

“I think everyone was really psyched up for this game and that kind of came up that first few minutes with those early game jitters,” Edey said. “I thought as the game went on we did a really good job of sticking to our scouting report.”

Edey scored 15 of his 23 points in the final 15 minutes, Braden Smith and Fletcher Loyer each added 14, and Purdue surged into a championship game matchup against No. 8 Duke.

Edey, Purdue’s 7-foot-4 center, was the catalyst for a big second half and took over for stretches. But he had a pretty good supporting cast. Caleb Furst added 10 points, and Purdue (5-0) shot 57 percent in the second half, made six of 11 3-point attempts and outrebounded the Bulldogs 46-31.

And Purdue had an answer for every run the Gonzaga tried to make.

“He’s a moose. He just camps out down there. He’s strong. He knows how to use his body. He knows how to get to his hook and it’s kind of just like, you have to put your hands up and hope he misses it,” Gonzaga forward Drew Timme said.

Purdue handed Gonzaga a second loss in the month of November for the first time since 2010. The Bulldogs (4-2) were 71-8 in November games since 2010 entering Friday.

Timme led Gonzaga with 22 points and nine rebounds in his highly anticipated matchup with Edey. Nolan Hickman added 15 but the rest of Gonzaga’s role players were mostly absent at the offensive end. Julian Strawther had just four points. Malachi Smith, who had 23 points in the opening round win over Portland State, scored three.

Gonzaga coach Mark Few was frustrated with some shot decisions and felt the offensive struggles led to defensive breakdowns in the second half.

“I thought we took a couple, well more than a couple, five, six, seven pull-up jumpers that we didn't need to and that led to some frustration and carried over to the defensive end. We got torched on defense in the second half," Few said.

Both teams exchanged eight-point leads in the first half, and it was Purdue leading 33-28 at the break.

Gonzaga pulled to 36-35 in the opening moments of the second half thanks to two baskets from Timme and 3 by Rasir Bolton. But the Boilermakers answered with 13 of the next 18 points. Edey scored in the paint twice and Newman’s 3-pointer coming off a screen pushed the Purdue lead to 49-40 and led Few to burn a timeout.

Purdue eventually pushed the lead to 12 as Furst scored eight straight points with a free throw, a pair of dunks and a 3-pointer that gave the Boilermakers a 57-45 lead with 8:36 remaining.

“Our guys are competitive. They’re fun to coach. They get along,” Purdue coach Matt Painter said. “They’re out there playing with purpose and that’s what you have to have. Early in the season, very few teams play with the purpose collectively. I thought our guys played with a purpose today.”

Purdue: The Boilermakers have won 12 straight games in November and 18 straight regular season non-conference games dating to the 2020 season.

Gonzaga: The Bulldogs last two-loss November in 2010 had setbacks against San Diego State and a neutral site loss to Kansas State.