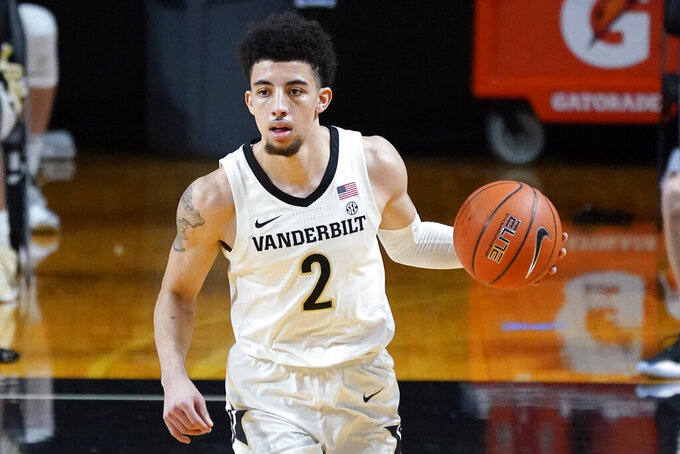 NASHVILLE, Tenn. (AP) — The two Southeastern Conference Tournament games that the league got in last year were played with fans in the stands.

Then the SEC shut it all down. No trophy presented. No confetti shot into the air. A stunning end to the league's premier hoops event because of the coronavirus pandemic.

A year later, the SEC Tournament will have yet another look with fan capacity limited to 20% or 3,400 at Bridgestone Arena and plans tested by the NHL's Nashville Predators for the past few weeks for physical distancing and as touchless an experience as possible.

“It’s good to be back," SEC Commissioner Greg Sankey said.

The SEC Tournament will start Wednesday night with one game thanks to Auburn, the last team to win this event in 2019, self-imposing a postseason ban. Vanderbilt (8-15), which played the last game a year ago, will open against Texas A&M (8-9), the No. 13 seed after COVID issues kept the Aggies off the court all of February.

There's also a dominant favorite once again, though this time it's No. 6 Alabama after winning its eighth SEC regular season title and first since 2002. The Crimson Tide (21-6) are looking for their first SEC Tournament title since 1991 when Wimp Sanderson was coach led by the SEC player of the year Herbert Jones.

Alabama coach Nate Oats says the Crimson Tide knows they'll be playing in the NCAA Tournament. He wants to see them hone their play after winning 89-79 at Georgia last weekend.

"And we'd like to win a tournament championship,” Oats said. “It's nice. They've won the SEC regular season. If you could add the tournament to it, that’s saying something if you can win both. And then obviously that helps your seeding going into the NCAA Tournament.”

Eighth-ranked Arkansas is the SEC's top-scoring team and hottest too going into the SEC Tournament, having won 11 straight league games. They're looking at the easier half of the bracket having only one loss to their potential opponents at LSU.

They're led by freshman guard Moses Moody, the SEC's third-leading scorer, and coach Eric Musselman said they like how they're playing obviously.

“We want more time with them," Musselman said. “We want more games. We want more of everything, and the only way really from from here on out with the SEC tournament, it’s one game and done. And then you move to the next tournament. It’s the same thing.”

Normally used to three-day weekends and high seedings at this tournament, the Wildcats (9-15, 8-9) begin on Thursday as the No. 8 seed against No. 9 Mississippi State. The Wildcats need their longest winning streak this season to avoid missing the NCAA Tournament for the first time since 2013.

That’s asking a lot from a young Wildcats team that has alternated losing and winning streaks, though the blue-blood program has some momentum after routing South Carolina 92-64.

It’s an ironic twist for Hall of Fame coach John Calipari. The coach now needs the very event he has criticized as penalizing the regular-season champion with a Sunday championship game ahead of the NCAA Tournament. If Kentucky survives the Bulldogs, a third meeting awaits against Alabama, which swept the Wildcats with double-digit wins.

Time is ticking to see some of the league's top freshmen. LSU guard freshman Cameron Thomas is the league's leading scorer averaging 23.1 points a game. Tennessee's best players the past month have been freshmen Keon Johnson and Jaden Springer, a pair of five-star recruits both rated as first-round NBA draft picks.

Don't ignore some of the guys with more experience. All-SEC Vanderbilt sophomore guard Scotty Pippen Jr. is second in the league with 20.6 points — the highest average of any sophomore in the country. He just scored a career-high 36 in a win at Cincinnati last week after sitting out three games with a sore hip.

Florida has the player everyone would love to see since he collapsed on the court in December. Keyontae Johnson has been a cheerleader since rejoining the Gators, who are making a push to help get SEC six teams into the NCAA Tournament. Vanderbilt is without the SEC's leading rebounder with Dylan Disu having knee surgery Feb. 26.

The hardest team to scout is Texas A&M. Aggies coach Buzz Williams said Monday that he had to isolate for 14 days, forced to watch some practices held with just four players via Zoom. The Aggies lost both games since returning, though they came close to upsetting Arkansas in Fayetteville before losing 87-80.

Vanderbilt coach Jerry Stackhouse isn't sure which A&M team he'll see Wednesday night. But he likely spoke for his fellow coaches on what has mattered most.

“For the last month or so, the best part of my day has been getting all COVID tests are negatives," Stackhouse said. "Those are some of the best words that I can hear.”

AP Sports Writers John Zenor and Gary B. Graves contributed to this report.