Beard and No. 14 Texas Tech living in moment of new season 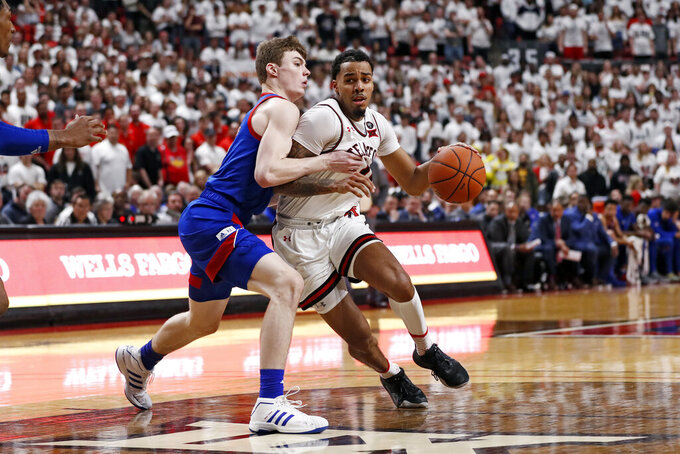 FILE - Texas Tech's Kyler Edwards (0) drives against Kansas' Christian Braun (2) during the second half of an NCAA college basketball game n Lubbock, Texas, in this Saturday, March 7, 2020, file photo. Texas Tech is technically still the reigning national runner-up since there was no NCAA Tournament played last season. The Red Raiders were on the floor warming up for their Big 12 tournament opener last March when the season suddenly stopped because of the novel coronavirus pandemic. (AP Photo/Brad Tollefson, File)

Texas Tech is technically still the reigning national runner-up since there was no NCAA Tournament played last season.

The Red Raiders were on the floor warming up for their Big 12 tournament opener last March when the season suddenly stopped because of the pandemic.

“A surreal ending to the season. I think it’s fueled players and coaches and everybody not only to have the best year you can have, that’s every year, but I think really to appreciate the journey,” fifth-year coach Chris Beard said. “We tell our guys, enjoy the ride, not just the destination. Live where your feet are, smell the roses, all these things basically mean, man, appreciate every day."

Even with the early departures of top scorers Jahmi'us Ramsey (for early entry in the NBA draft) and Davide Moretti (to play professionally at home in Italy), the Red Raiders are 14th in the AP preseason Top 25 .

Graduate transfer Santos-Silva, a 6-foot-7 forward and lone Tech senior after starting all 64 games for VCU the past two seasons, is the Big 12 preseason newcomer of the year.

“My main focus was to go somewhere that’s got a winning culture,” said Santos-Silva, who averaged 12.8 points and 8.9 rebounds last season.

Tech also had significant roster changes last season when coming off the overtime loss to Virginia in the national championship game.

But freshman standout Ramsey and the Red Raiders never got a chance to play any postseason games last March, after finishing their 18-13 regular season with a four-game skid, including an overtime loss at Baylor and then 66-62 to then-No. 1 Kansas in the finale at home.

“I think, really, our Texas Tech team was one of the stories in college basketball that would have been told on the biggest stage of March Madness,” Beard said. “Everybody kind of likes to think back to the Final Four team, but I would argue last year’s team was a really good team.”

Along with Santos-Silva, the Red Raiders have a pair of junior guards who were Division I starters the past two seasons.

McClung led Georgetown with 15.7 points a game last season, though the 6-2 guard missed 11 games because of a right foot injury. McClung averaged 13.1 points as a freshman for the Hoyas, and scored 33 points in a game at Big 12 team Oklahoma State.

Beard believes this could be one of his best shooting teams at Texas Tech, along with a “chance to be a very good defensive team because of our athleticism and length, and toughness and experience.”

One of Beard's first objectives at Tech was “to simply have Big 12 players on the roster from slot one to 13," a goal he feels has been achieved.

Beard had never gone into a season with a beard until now.

“Obviously, with my last name, that doesn’t make a lot of sense,” he said.

After an extended time without shaving during the offseason, his mother, longtime girlfriend and three daughters all told him the beard looked good on him.

“It’s a lot of work, but keeping the women in my life happy, especially right now with basketball season where I’m about to see them about 10 minutes a week total, the beard’s worth it,” he said.

Texas Tech's third game in the first five days of the season will be Nov. 29 against No. 17 Houston at Dickie's Arena in Fort Worth. The Red Raiders and Cougars were initially part of the preseason NIT tipoff tournament that was supposed to be played in Orlando, Florida. T he Red Raiders won’t leave Texas for any of their non-conference games, and open Big 12 play at home Dec. 17 against No. 6 Kansas.