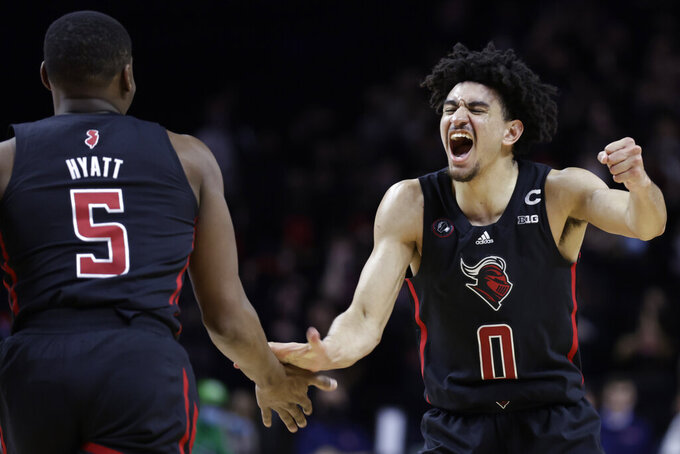 Rutgers guard Geo Baker (0) celebrates with Aundre Hyatt during the second half of the team's NCAA college basketball game against Illinois on Wednesday, Feb. 16, 2022, in Piscataway, N.J. (AP Photo/Adam Hunger)

Rutgers at No. 5 Purdue, Sunday. The Scarlet Knights (16-9, 10-5) have won four straight games — all against Top 25 opponents — and are bunched with five teams within two games of the conference-leading Boilermakers (23-4, 12-4). Rutgers will be looking for the two-game season sweep of Purdue. Ron Harper Jr.’s long shot at the buzzer beat the then-No. 1 Boilermakers in December. Harper is questionable with a hand injury. Purdue has won two straight following its 24-point loss at Michigan last week.

Michigan (14-10, 8-6), the media's preseason pick to win the league, is sitting in seventh place and in danger of not making the NCAA Tournament after reaching the Elite Eight last year. The Wolverines took a step in the right direction with Thursday's 84-79 win at Iowa, and they have plenty of opportunities to enhance their resume. After they visit No. 15 Wisconsin on Sunday, they play four straight home games against Rutgers, Illinois, Michigan State and Iowa.

Illinois' Alfonso Plummer is on track to make the most 3-point field goals since Carsen Edwards had 135 for Purdue in 2018-19. Plummer has 74 in 25 games, an average of just under 3.0, and is shooting 40% from distance. Plummer has made at least five 3s in seven games, including a 7-for-9 night against Kansas State in November. Last year, Plummer made 64 3s at Utah and led the Pac-12 with 2.6 per game.

No. 13 Maryland (20-6, 12-3) is the hottest team in the league with eight straight wins and plays the women's game of the week at No. 9 Michigan (20-4, 11-3) on Sunday. The Terrapins are percentage points behind first-place Indiana, one game up in the win column on the Hoosiers and one down in the loss column. ... Northwestern defeated its highest-ranked opponent in more than 40 years last Sunday with its 71-69 double-overtime win over then-No. 4 Michigan. It was the second highest-ranked victory in program history behind a 75-58 win over No. 3 Long Beach State in 1982. ... The Big Ten leads all conferences in scoring (71.0 ppg), field-goal percentage (.434) and 3-point percentage (.341).