Column: Sports to deliver at a time they're needed the most 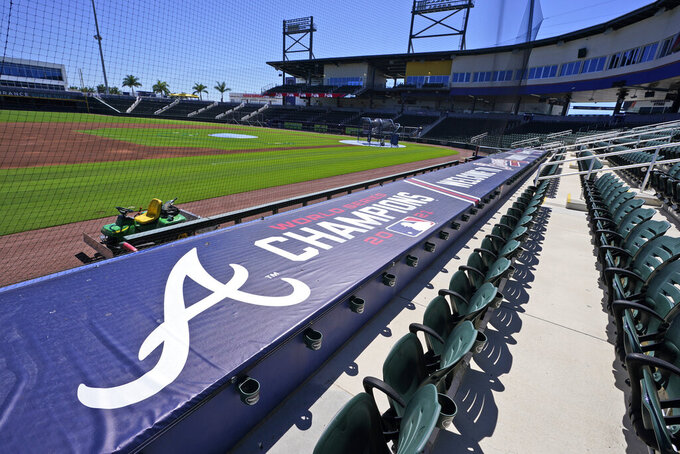 The CoolToday baseball park is ready for the Atlanta Braves for the start of Major League Baseball spring training at the CoolToday Park, Sunday, March 13, 2022, in North Port, Fla. (AP Photo/Steve Helber)

Once again, hope springs eternal, at least on the ballfields in Arizona and Florida. Soon, there will be spring training games and then a season that even the collective greed of Major League Baseball owners and players couldn’t derail.

Just how much the labor dispute turns off fans is anyone’s guess. Baseball has been losing followers for other reasons for some time now, so delaying opening day for a few days may turn out to be a mere blip. And while the game may be deeply flawed, the outpouring of disgust about the lockout was an indication there’s a core of passionate followers.

Baseball is back and for that we should all be grateful. That makes this week special all by itself.

But there’s more, lots more. Sports are about to deliver, just when we need them the most.

Aside from spring training games, there's the bonus of an MLB free-agency frenzy that will make some teams and remake others. NFL free agency begins, too, kicking off several weeks of offseason intrigue — including Tom Brady's unretirement — that will culminate next month in what will surely be the glitziest draft ever on the Las Vegas Strip.

There’s a Monday finish at The Player’s Championship, which serves as a tasty reminder that the Masters lurks only a few weeks away. No, Tiger Woods won’t be playing and Phil Mickelson may not either, but it's a new era in golf that offers a new kind of intrigue.

And, of course, March Madness begins with a bang and any of two dozen teams might have a realistic shot at winning the national championship this year. Filling out brackets has never been tougher but for many there’s now opportunity at the sportsbooks, too, if brackets get busted before the week is finished.

It’s all a diversion from the serious troubles in the world, as sports often are. The games solve nothing in the real world, but for a few hours we can forget about things like war and inflation and immerse ourselves into an alternate reality where we know the score and understand the rules.

Two years after the pandemic shut everything down, almost every sport is back at full roar and fully open to fans — masked and unmasked.

It’s not just one week, either. The NBA and NHL are deep into the best parts of their seasons, with the playoffs looming in just a few weeks. The Kentucky Derby and Indianapolis 500 don’t seem that far away, and there are so many sports crammed in between that the biggest issue for many fans will be figuring out how to watch them all.

Did I mention there will soon be spring football? Yes the USFL is back in a new iteration for diehard football fans, and this time it may just work because the deep pockets of Fox Sports are behind it.

Major League Soccer has just begun, and there’s probably more happening in soccer, too, but for now we’ll just have to be content enjoying the machinations surrounding the forced sale of the Chelsea club by its soon-to-be former owner, Russian oligarch Roman Abramovich.

And be glad that millionaire players and billionaire owners found enough common ground to give us something resembling a normal season — the schedule and rhythm that are both familiar and reassuring, and the opening of spring training giving us some hope that a good summer will follow.

This week, Clayton Kershaw will be on the mound in Arizona, as will Shohei Ohtani, who will be warming up his bat and his arm. In Florida, Aaron Judge will take his first hacks and the Minnesota Twins will desperately search for some pitching (and bring Sonny Gray into the fold).

Meanwhile, someone, probably the Dodgers, will sign Freddie Freeman to a big contract.

Baseball is back, and for now that means hope really does spring eternal.

Tim Dahlberg is a national sports columnist for The Associated Press. Write to him at tdahlberg@ap.org or http://twitter.com/timdahlberg