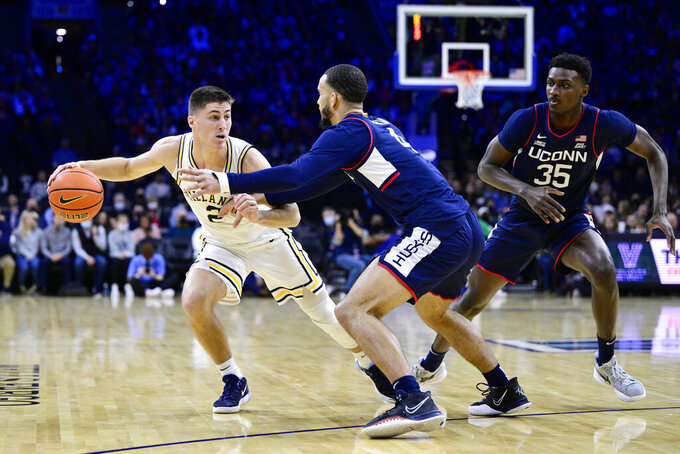 Villanova's Collin Gillespie, left, dribbles past the defense of Connecticut's Isaiah Whaley and Samson Johnson (35) during the first half of an NCAA college basketball game, Saturday, Feb. 5, 2022, in Philadelphia. (AP Photo/Derik Hamilton)

PHILADELPHIA (AP) — Collin Gillespie received a roaring ovation from nearly 19,000 fans when Villanova's leading scorer returned to the bench after a sprained right ankle sent him to the locker room.

With a 23-point lead shrinking, coach Jay Wright asked Gillespie if he could play. The short answer, no.

Now the Wildcats take a deep breath and hope Gillespie won't miss much more than the final minutes of another decisive Big East win.

Eric Dixon scored a career-high 24 points, Gillespie scored 19 before he hurt his ankle, and No. 12 Villanova beat No. 17 Connecticut 85-74 on Saturday.

Gillespie returned for a fifth season after a torn ligament in his left knee cost him the 2021 Big East Tournament and NCAA Tournament. He grimaced as he was helped off the court on Saturday and went straight to the locker room. He needs X-rays and there was no immediate word if he could play Tuesday at St. John's.

Dixon had the breakout game of his two-year career and cruised past his previous best high of 15 points. Dixon grabbed 12 rebounds, made 10 of 15 shots for the Wildcats (17-6, 10-3), and keyed a 12-0 run in the second half that busted the game open and seemingly put it out of reach.

“He's got so much more in him,” Wright said. “It’s amazing. He can shoot it, too. It’s growth. He’s smart enough to know it doesn’t happen overnight. You've got to just keep working at it."

Dixon said he learned patience by watching former Wildcats bide their time and then break out when needed.

The Wildcats played the final 6:53 without Gillespie and the entire game without second-leading scorer Justin Moore (sprained left ankle). That opened the door for the Huskies to cut a 23-point hole to 10 with 2 minutes left.

The Wildcats sealed the win at the free-throw line and made 21 of 22 overall.

“I just wanted to show Justin that we were there for him,” Dixon said. “We were going to go out there and play hard and be together.”

“I still think we’re one of the best teams in this league.,” UConn coach Dan Hurley said.

The Wildcats bounced back from a loss at Marquette to win their fifth game of the season against a Top 25 team. The key stretch came early in the second half after the Huskies pulled to 47-40.

Unhappy with UConn’s run, Wright called timeout and pulled his team together. Chris Arcidiacono hit a 3, Caleb Daniels turned a steal into a dunk, Dixon scored off another UConn turnover, and then came the shot of the game: Gillespie fired a 3 and the ball took a high bounce off the rim, a second bounce, then two taps off the rim and in for a 57-40 lead.

“At that point, I was just in a panic,” Wright said. "Just stop the bleeding. It wasn’t like we had some great plan. Let's take a break here. They were steamrolling us. Maybe we got our composure."

The 3-point happy Wildcats -- they twice this season hit 13 in a game -- had made only one with 7 minutes left in the first half and still led by seven.

Dixon, who averages 9.1 points, scored 14 in the first half. He made all four free throws and five shots from the floor. Gillespie made all three 3s he attempted in the half. With chances from beyond the arc at a minimum, the Wildcats countered with a 22-6 edge in the paint.

UConn: The Huskies missed 11 of their first 16 shots and slogged through a second straight game off a tepid first half. Against Creighton on Tuesday, UConn scored only 22 points in the half and trailed by 10. Cole’s halfcourt heave at the halftime horn was good and pulled the Huskies to 40-29.

“I just thought that we did really nothing in the first half that we talked about doing,” Hurley said. “I think we were just a little bit out of sorts.”

Villanova: Moore sprained his left ankle against Marquette. Moore is second on the Wildcats in scoring at 15.1 points. ... Arcidiacono, who scored nine points, would start for Villanova if Gillespie can't play.

The Huskies' chartered flight couldn’t leave Connecticut for weather reasons, so they made a long bus trip Friday night. It’s going to feel like a longer trip home -- the Huskies haven’t beaten Villanova since 2014 (0-5).

“I don’t think any particular team in the league is in our head,” Hurley said.

UConn: Hosts Marquette on Tuesday at the XL Center in Hartford, Connecticut.