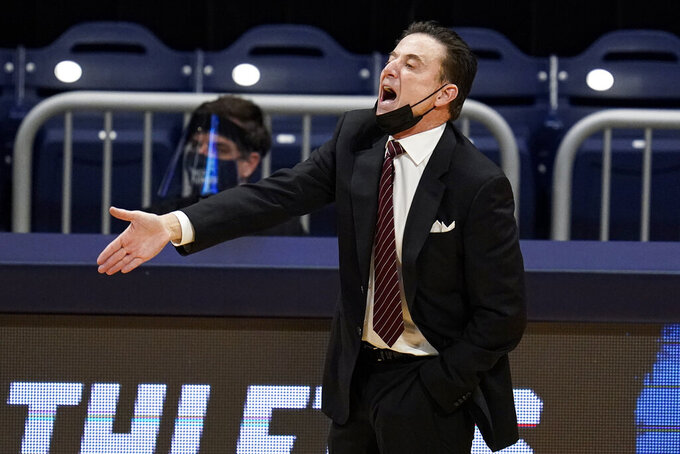 Iona head coach Rick Pitino gestures as his team plays against Alabama in the first half of a first-round game in the NCAA men's college basketball tournament at Hinkle Fieldhouse in Indianapolis, Saturday, March 20, 2021. (AP Photo/Michael Conroy)

That he won't get to use any more of the eight designer suits he packed for the NCAA Tournament is only because of an Alabama team that came at Iona in waves Saturday and finally pulled away for a 68-55 win to end Pitino's dreams as a No. 15 seed.

“To be honest, we thought we could win tonight,” the coach said.

Of course they did. It's why Pitino packed for the long haul on this trip to Indianapolis, figuring it could be like so many of his other 21 trips to March Madness — maybe like the time he took underdog Providence and Billy Donovan to the Final Four back in 1987 as a 6.

This time, Pitino had his worst seed ever and second-seeded Alabama (25-6) was too much.

Herb Jones led the Crimson Tide with 20 points, including a steal and layup that highlighted an 11-0 run and gave Alabama breathing room at 58-46 with 6:36 left after the teams seesawed the lead through much of the second half. The Crimson Tide will face 10th-seeded Maryland in the second round on Monday.

This is the fifth, and maybe most unlikely, program Pitino has brought to the tournament, in large part because the Gaels (12-6) went 50 days without playing a game in midseason due to COVID-19.

But they won their conference tournament as a 9 seed, and felt as if they were rolling coming into Indy.

Pitino, who has led Kentucky and Louisville to national titles, coached like he always does.

Wearing a black suit with a maroon tie that matched his team's colors, the 68-year-old urged, cajoled, yelped and stomped his black shoes on the hardwood to grab his players' attention.

Most of the time, he had them in the right position.

Iona forced 14 turnovers, and Alabama had trouble getting an open look for most of the first 30 minutes. The Gaels got lots of open looks themselves. What did them in was an inability to make them. Isaiah Ross scored 19 points on 8-for-18 shooting. The rest of the team went 15 for 41.

“We've been offensively challenged all year,” Pitino said. “But they gave me their heart the entire year. I’m really proud of them. Unfortunately, we didn’t have enough weapons to beat Alabama.”

Iona also got dominated 42-26 in rebounds, a stat Pitino said surprised him.

Indeed, the deeper, more athletic team finally wore them down.

Alabama is in the tournament with its best seeding in history, on the strength of its first SEC Tournament title in 30 years. As the buzzer sounded, Oats shared a handshake with Pitino and a refrain more commonly heard on the gridiron echoed from the rafters at Hinkle Fieldhouse: “Roll Tide.”

Pitino isn't done believing his team could be give more teams like that fits in coming years.

“The thing is, it was never really about me,” he said. “I came back to Iona. I wanted no part of the so-called big-time anymore. I had enough of that. I wanted to take a smaller school like Providence, like Iona, and try to make it big.”

Pitino said it wasn't so much the big-time that he was done with, but what happened to him while he was coaching in the big time. He was ousted from Louisville after a scandal-ridden tenure that included a pay-for-play case.

“I’m turned off about what happened to me,” he said. “I want no part of that anymore. I just want to coach and teach young people how to become better basketball players.”

Pitino says things are just getting going at Iona, where he’s working on a tougher schedule that might give the Gaels a chance at an at-large bid if they don’t win the conference.