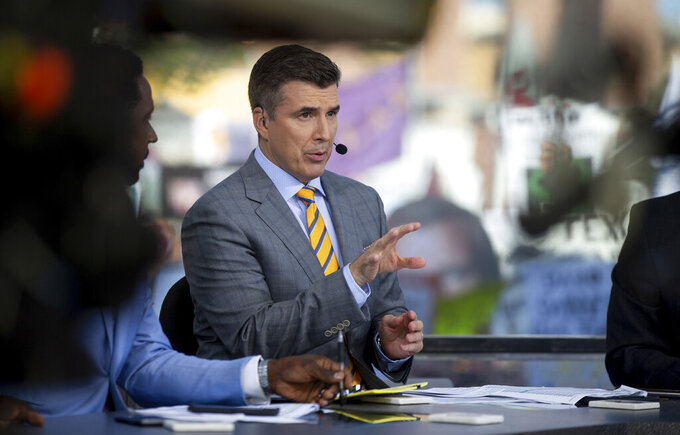 FILE - ESPN College Game Day's Rece Davis gestures while talking on the set in College Station, Texas before the start of an NCAA college football game between Clemson and Texas A&M, in this Saturday, Sept. 8, 2018, file photo. ESPN has re-signed Rece Davis to a multiyear contract that will keep him in place as the host of the network’s popular Saturday college football pregame show. The network announced the deal Monday, March 1, 2021. (AP Photo/Sam Craft, File)

ESPN has re-signed Rece Davis to a multiyear contract that will keep him in place as host of the network’s popular Saturday college football pregame show.

The network announced the deal Monday.

Davis, 55, is entering his seventh year as host of ESPN’s “College GameDay.” He told The Associated Press this new deal will take him through his 10th season leading the show that includes Kirk Herbstreit, Desmond Howard and Lee Corso.

"I believe I have the best job in sports television, but when you’ve been doing anything for a while there comes a period of evaluation, I guess, to see whether there are things you would like to pursue,” Davis said. “And for me I still very much wanted to host ‘College GameDay’ and to still have the opportunity to host some significant events along with that from time to time. Fortunately for me our place was able to provide all of those things.”

Terms of the deal were not disclosed by the network. Davis will also continue to host ”College GameDay” for basketball, along with the network’s coverage of the NFL draft on ABC and the men’s Final Four.

Davis is also set to host ESPN's coverage of the UEFA European Football Championship this summer. He will still to do some play-by-play for college football and basketball games.

“The professionalism, energy and knowledge he brings to every show and every assignment is first-class as one of the best in the business," ESPN senior vice president of production Lee Fitting said in a statement.

Davis declined to say if he was pursued by other networks, but he said negotiations with ESPN moved expeditiously.

“ESPN, and my long relationship with them, sort of had what I feel like my strong suits are but also opportunities to do some things to continue to grow as well," Davis said.

The basketball version of “GameDay” began in 2005 with Davis as the host. He took over as host of the college football road show in 2015, replacing Chris Fowler.

Davis said he enjoys calling games and might consider making a similar transition later in his career.

“I feel like I've really built my career on hosting,” Davis said. “I hate the phrase tee-up the analyst. Anybody can do that. A good host is prepared for the conversation and knows where the lines are.

He added: “My first priority is ‘GameDay.’ I still get a rush every time. I like being at the command center of big events."

“College GameDay” had a very different vibe last year as the coronavirus pandemic forced the show to be held on location but without fans. The threat of COVID-19 led to Corso, 85, doing the show from his home in Florida.

“College GameDay” faced competition for the first time the last two seasons from Fox's “Big Noon Kickoff," but ESPN's show has remained on top in terms of viewership.

“The best way to do it is to take care of your business and not be fixated on what someone else does and to be be confident and thorough in the direction you've tried to go into to,” Davis said. “If you start trying to react to someone else, that's more detrimental than helpful in my opinion.

”We still want to be regarded as the ultimate destination and if you turn away from our show, you're going to miss something."